As a youngster my fishing was limited to a few local golf course ponds and a few others I maybe should not have fished. Night crawlers were the bait of choice and it worked well for some time. I saved enough money and bought a Mitchell 300 spinning reel, at the time it was tops. With the new spinning combo I also purchased a few Original Daredevle's in red and white. The next trip to the golf course pond I was amazed by the number of pickerel that this lure brought in, they would attack it with gusto.

While fishing the Farmington River years after I fished this Daredevle with confidence and it produced its share of trout. When I picked up the fly rod, a new arsenal would be needed, but funds were limited so the flies I purchased must be good fish catchers. One of the first flies I spotted in the shop was a Red and White bucktail, I purchased a few to start along with some others and was off to the river. That Red and White bucktail worked as well on those stocked trout as the Daredevle.

Some how the bucktail was put into the box and more realistic insect looking flies were used. It stayed pretty much lkie that until one August while we were vacationing in Rangeley Maine. While walking down the long road to Upperdam, two flyfishers were on there way back. We chatted for a while and they said the Red and White were working. As I tied on a #10 Red and White and cast it into those rough swirlling waters, a silver streak came up from his bottom lie to slam the bucktail. That short evening was a top 10 in my fly fishing days.

I still use that Red and White from time to time, with thoughts of that Landlocked salmon in Upperdams waters showing his colors for the Red and White bucktail 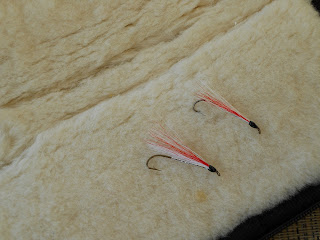 The "Red and White" bucktail. A simple and perhaps not used enough fly.