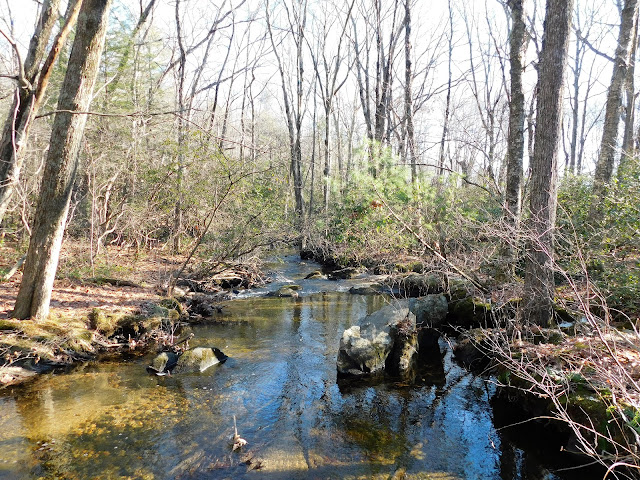 Remember the fly I wrote about a couple of posts ago, well I have fished it a few times now in a couple of streams. I was surprised how well it was recieved by the local char, not really surprised because I had a strong feeling it had the attributes of a fish taker. But the surprise came by where many strikes came from. The fly actually is a small streamer but it was being taken near the surface like a caddis emerger. Some of the brookies swiped at it as it was swinging and several slammed it as it sat near the bottom.

I wish I had underwater video of the flies action for it was remarkable. As the fly lay motionless in the current the darker portion of the fly expanded which chickabou will do. Well that expansion drew some violent strikes and that led me to believe the brookies were taking it for a sculpin. Many small streams have generous populations of sculpin and they are a sought after food source for trout. 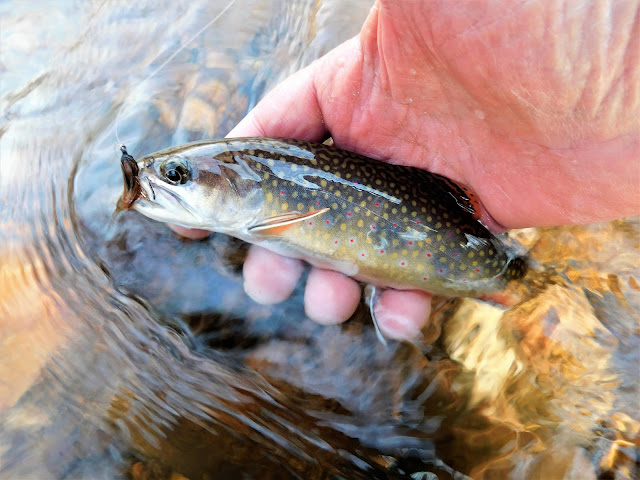 A brookie that took the chickabou fly. 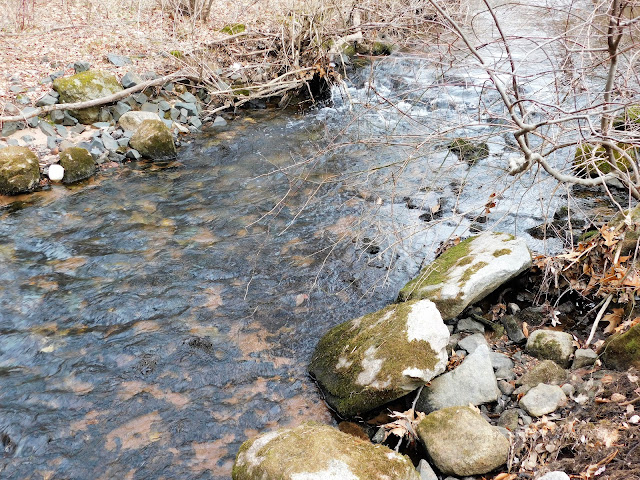 In this riffled section of stream is where the chickabou fly was taken as a caddis. 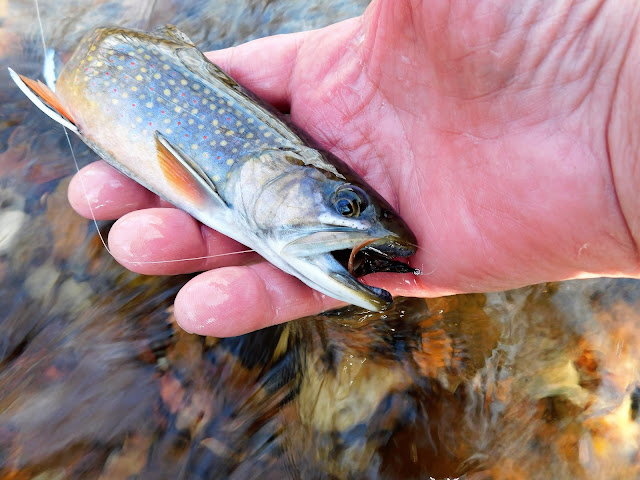 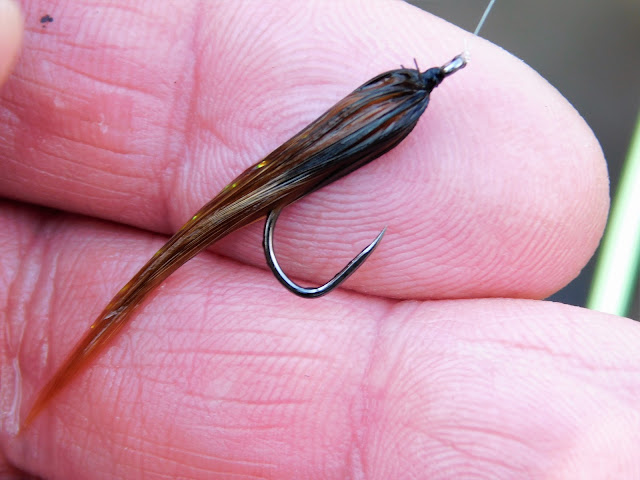 When wet you can see a sculpin like resemblance.  From a large head to a thin tail. And when the water flows through it life is put into action. I have tied a variant of it using a short shank hook. More on that later. 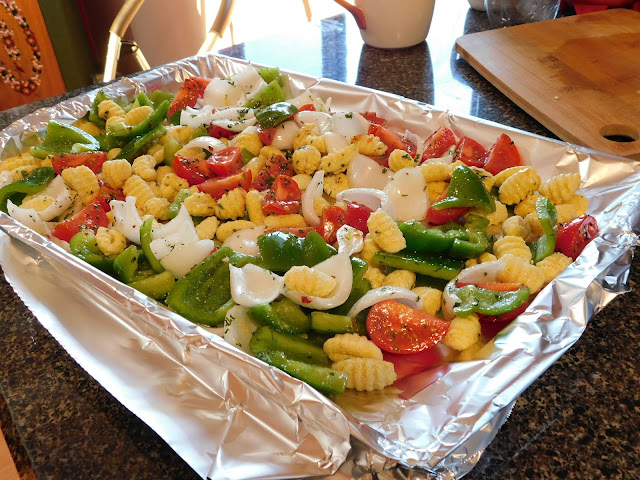 Webster -Wiki and others....How did I miss these. 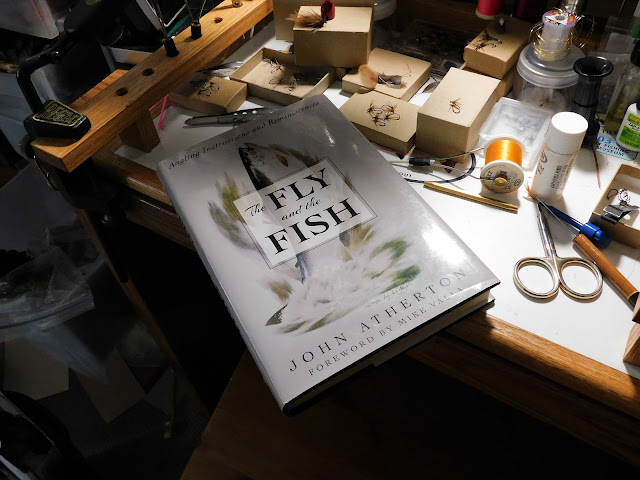 "Classic"...serving as a standard of excellence....Often the use of this word is dramatically overplayed. I for one use it but in very limited instances. Many times this word is not used when actually it should. Classic is used in most every which way describing food to automobiles and I can attest to as well as you can that this is farther from the definition. The book you see in the first picture was gifted to me by a reader of this blog. It has been in print for over 60 years. While the author is a name I'm familiar with I have never read the book. Mr. Atherton  in his writings within the book share many of my beliefs as well as many that I intend to use going forward. His thoughts on impression in both fly construction and how the fish react to that impression have been a part of me since I started this journey. He also used numbers to identify his beautiful fly creations. So simple and yet I struggle with naming the flies I create. One of his creations was numbered 5...a dry fly. So at the bench using some materials given me along with the book I attempted to tie the #5 "Classic"... 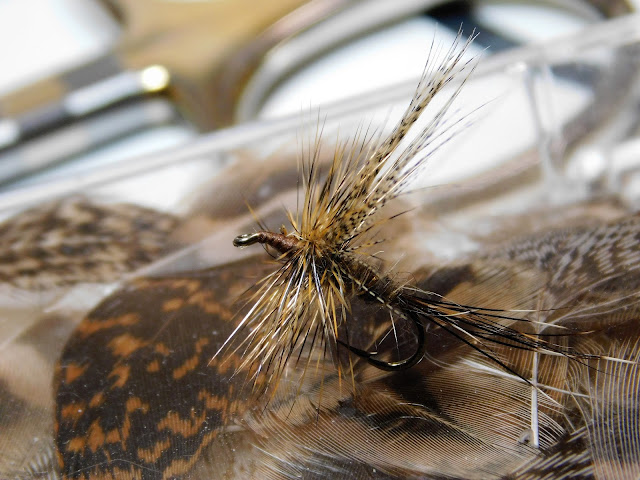 Atherton's #5...again some of the materials are equal to the originals and some have been improvised. My attempt at tying a Catskill style fly is far from a master Catskill tyer. I honestly believe that John Atherton would agree that it's impression is close enough. 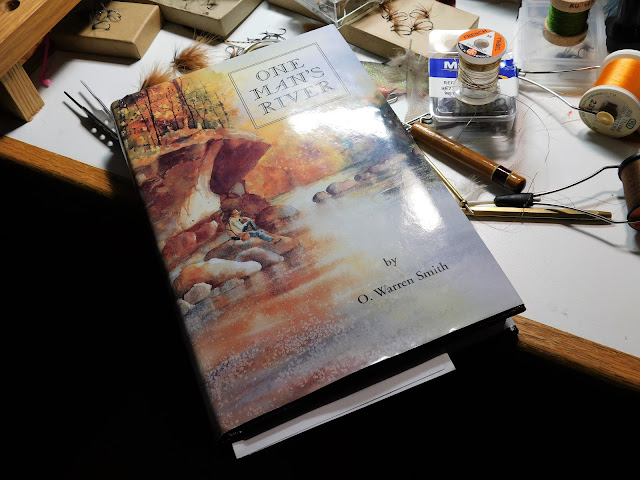 Another book that I was gifted. It to should be hailed as a "Classic"...I have never read the book but it has been out there for decades. Mr. Smith also hold many of my feelings about flies, fishing and where it all takes place. 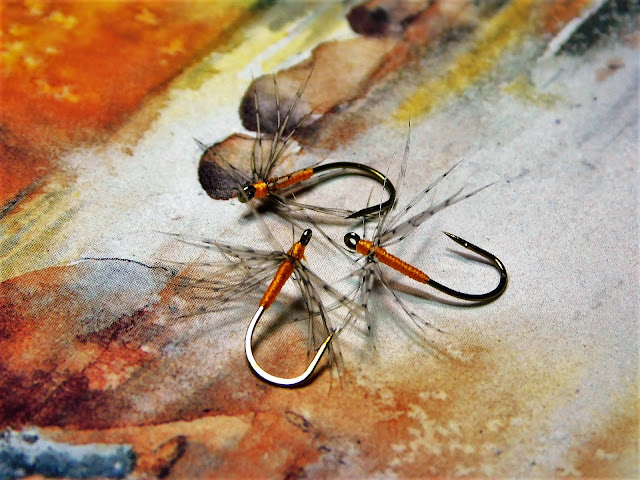 The "Classic" Partridge and Orange Spider. 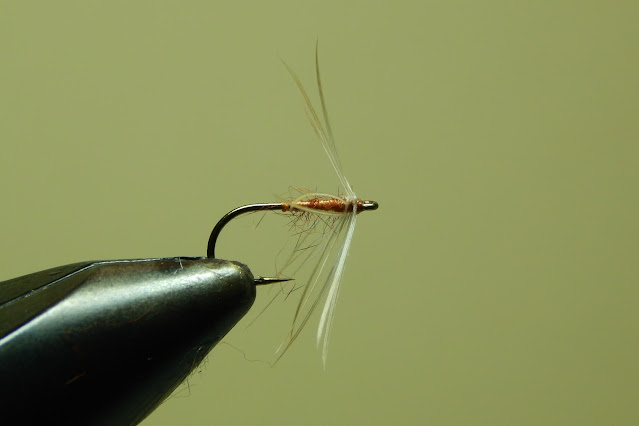 My first numbered fly in the tradition of John Atherton...# 1 Spider.

A '" soft hackled" fanatic and a Jack Gartside influence.... 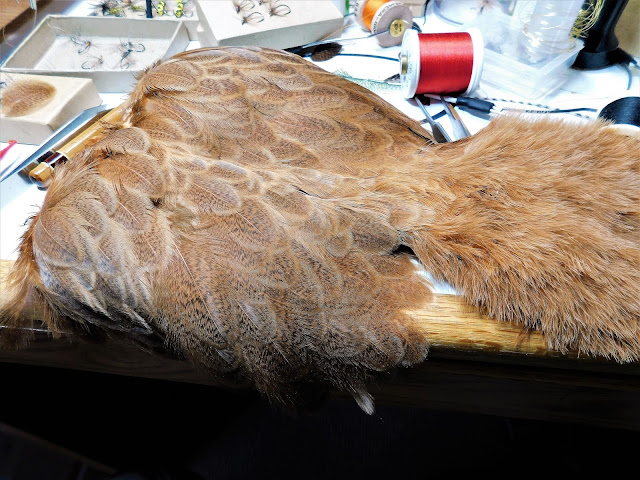 Hen hackle a under used group of feathers in the tying of soft hackle flies. Many of the books written talk of using game bird and exotic feathers in there construction of soft hackle flies and spiders. While I adore game bird feathers I want to say there is a great deal of other options available to the fly tyer. Many of these options are a lot less in cost some as much as 60%....there are a vast array of colors and natural feathers. Hen hackle wraps easily on the hook and moves with lifelike features in the water.

Above is a Whiting Brahma Hen Cape, with Chickabou. These can be purchased for about 20.00. A Partridge cape retails for near 50.00. 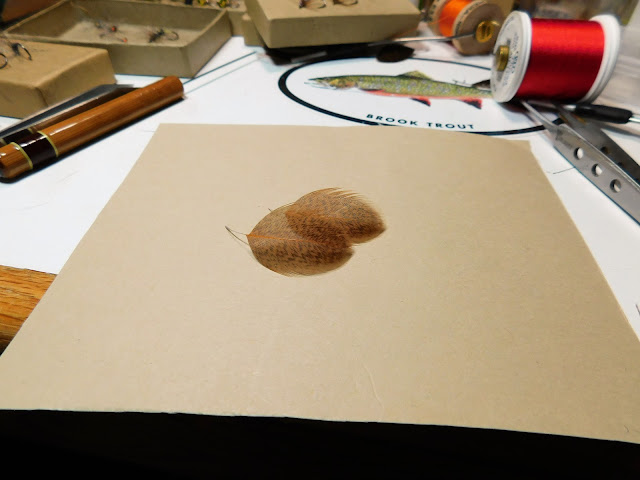 Here is a feather taken from that hen cape. Notice how well marked it is. It is very similar to Partridge and can substitute easily. I also like the color which is dyed golden brown. 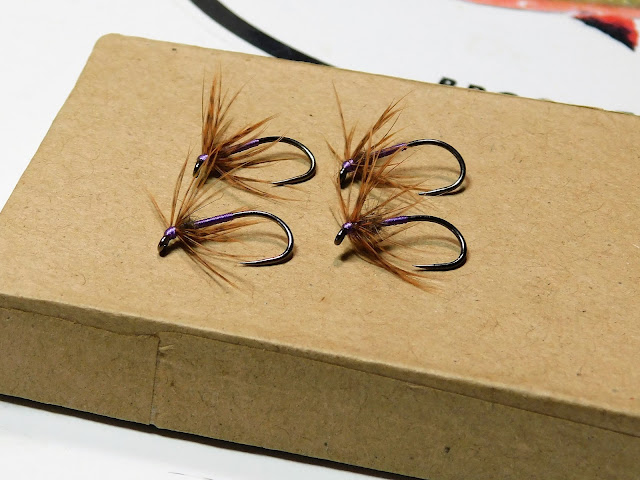 These soft hackles were tied with the feathers from the cape above. 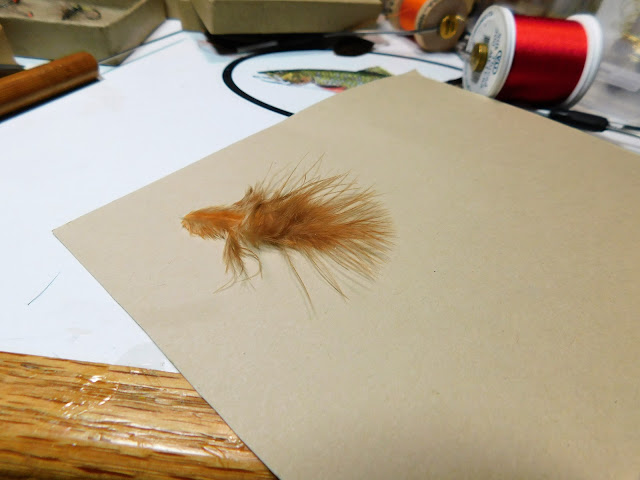 This is a chickabou feather that also came from the cape above. It is that section that looks like a tail at the back of the cape. It has marabou likeness and it can be used various ways including "small" streamers. 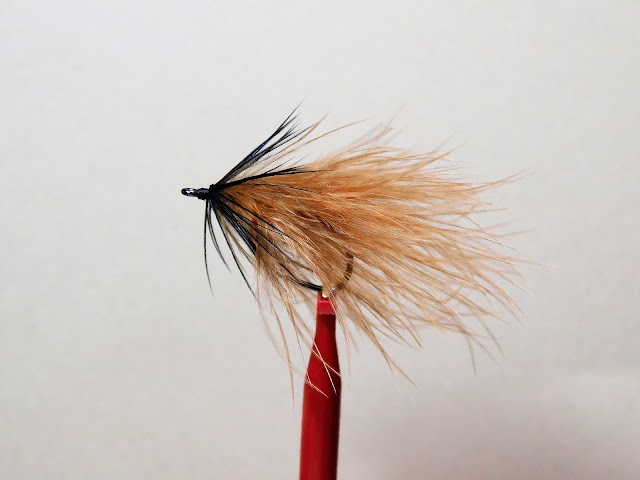 Here is a "small" streamer tied with the use of chickabou feathers. Three feathers were used along with a black hen feather as a collar. The black gives the fly a contrast. Krystal Flash can also be added. The hook is a Firehole 718 #12...this fly will move in the water like a live baitfish.

Jack Gartside created the soft hackle streamer which this fly is based on. Jack used turkey marabou and tied larger streamers. Anyone who has ever fished on of Jack Gartside's patterns knows they get results.
These "small" streamers  work well using the "Tiny Ten" tenkara rod.

Do you fish such places? 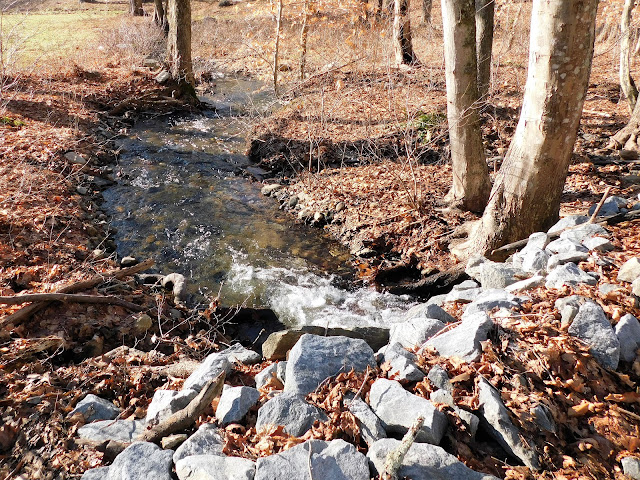 I fish small streams most of the time. Now these streams are sometimes tiny and even dry up in bad drought years. The last few weeks I have visited many of these tiny creeks most of them feed larger streams. While most of them are still barren of fish some of them will surprise me with a  brook trout or two. But as a whole fishing these creeks is more a walk in the woods and that's not such a bad thing either. Creeks as this may have a draw to spawning trout in the fall but soon after that the trout return to the somewhat larger stream. Then there are a few who choose to stay within the tiny creek. My question is "why"...these creeks do not have the forage to hold trout, many times the cover is scant and yet they remain. I'm happy to see that there are trout in these creeks, for fishing for them can be enjoyable. Wild trout are not choosy what flies they take and you could fish one fly the whole outing. 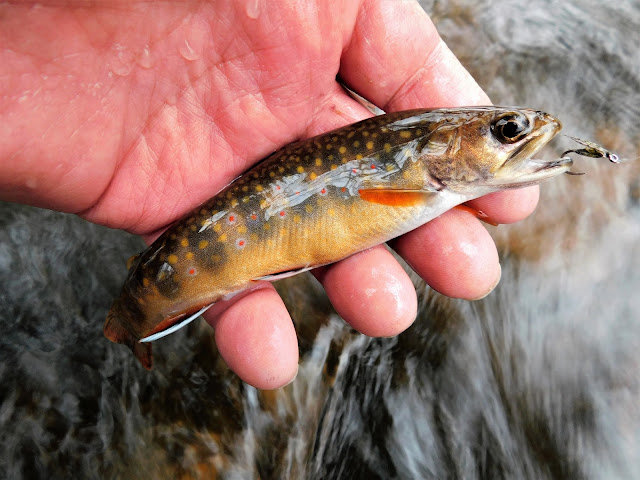 In your travels do you find and fish such tiny creeks? 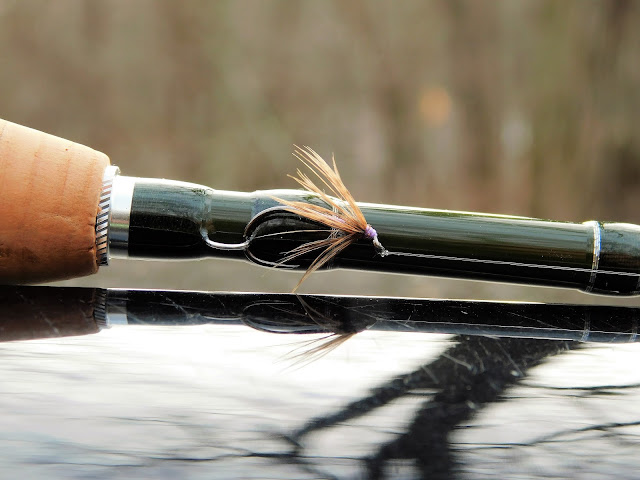 A fly to start and a fly to finish.

Look what I brought back from Shenandoah. Plus.....

The first or second trip we took to Shenandoah National Park we stayed in the town of Front Royal VA. a real nice town with lots of history. It is also very close to the park entrance and that made it so convenient. Being unfamiliar with the restaurants in town we decided to check them out by trial and error. Knowing that is not always the best way I put into action an old saying when looking for a good place to eat, that saying is "look at the parking lot" if there is a variety of cars and trucks then generally you will find good food. That was the case when we entered the Knotty Pine Restaurant. Walking in we were warmly greeted. We were seated at a clean booth and offered a menu. We chose a country fried steak with gravy and fries. For a side dish I selected cabbage and pork. The meal was delicious but that cabbage and pork was to die for. As it turns out that same dish is served on New Years Day in most of the south. It's said to bring good luck in the new year....it's delicious. 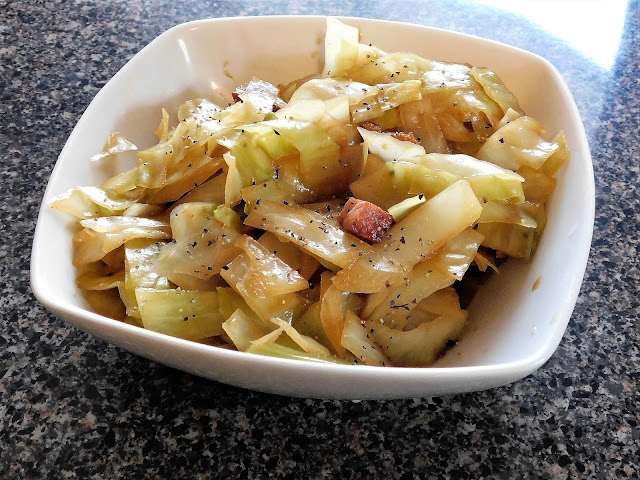 Slice a piece of salt pork, fry it in a pan. Add sliced cabbage and fry the pork and cabbage until tender. Add salt as needed, be careful for it's easy to over salt. Lots of pepper and enjoy. 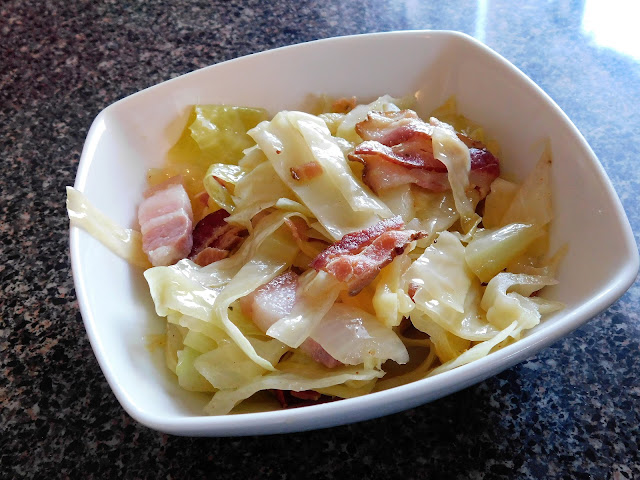 This one has bacon and salt pork. 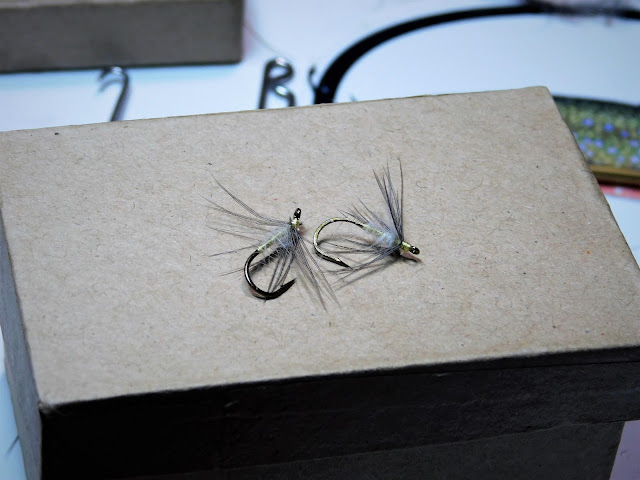 I have been fortunate to have been given some great fly tying materials from the readers of SSR's. I have been able to use them in tying some classic North Country Flies. This is the Waterhen Bloa. Thanks Lou. 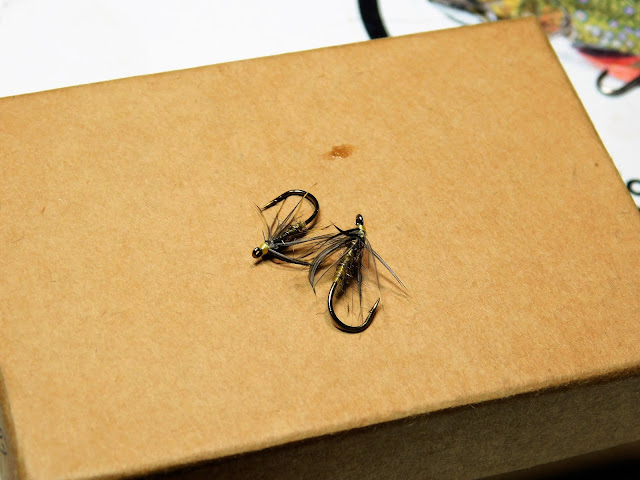 Here is the classic Hares Lug and Plover. Thanks Kevin 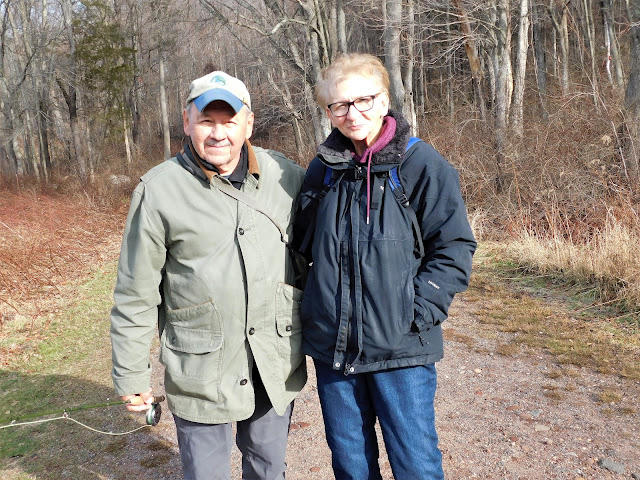 New Years Day. For over ten years a group of  small stream anglers got together to fish a stream. There was something special about being able to take that first fish of the year in a delightful setting with a group of like minded gents. This being the year of covid our actual meeting had to be set aside. So in place we decieded to do it but with close family members. So on day #1 Jeanette and I fished a stream together. The weather was actually quite nice. The half sun half  light cloud day was easy to take compared to some awful New Years Days in the past. The stream was pristine, it's flow ideal. There was hope in day #1.... 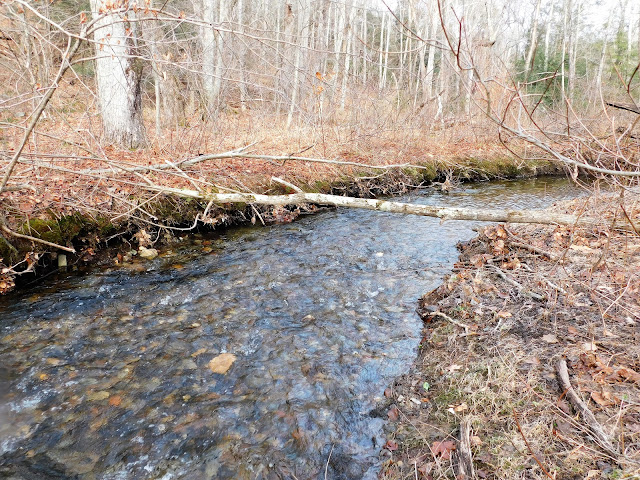 As you can see the stream was just perfect. Recent rains cleared a lot of branches and other woody debris and deposited it elsewhere. 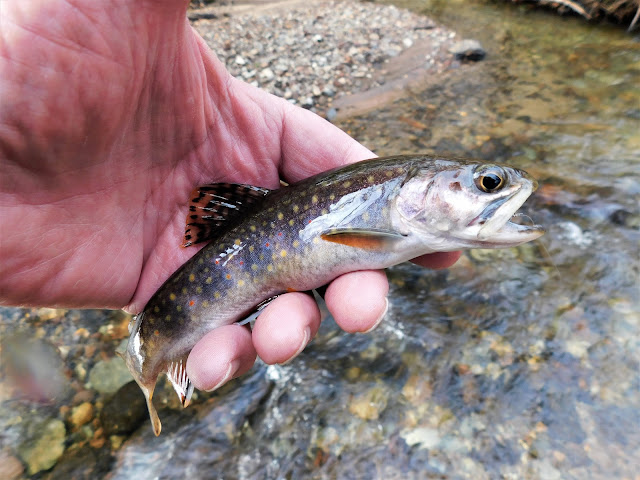 The first wild jewel of 2021. A healthy specimen that took a soft hackle on the swing. 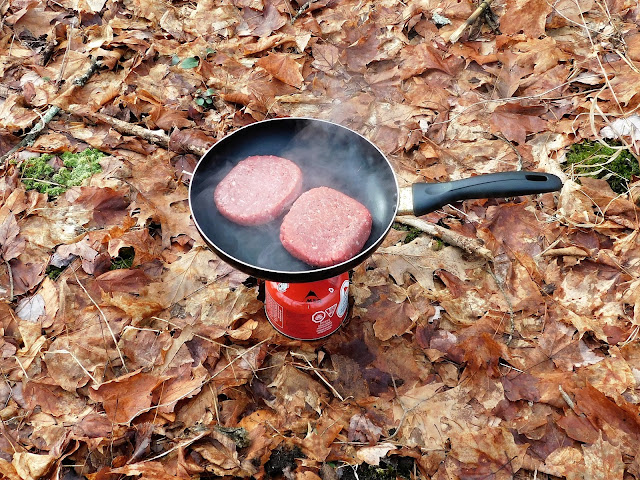 Usually the lunch would be chili but the deer harvest did not happen for us. So a couple of burgers were cooked up. 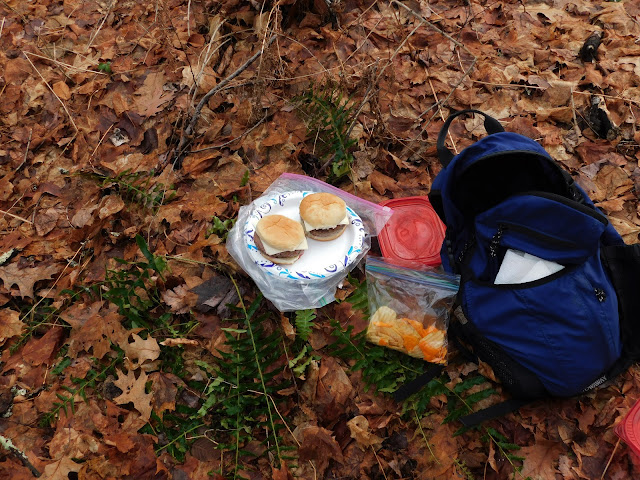 There was also a side dish that is a tradition in the south on New Years Day. I'll give you the details in another post. 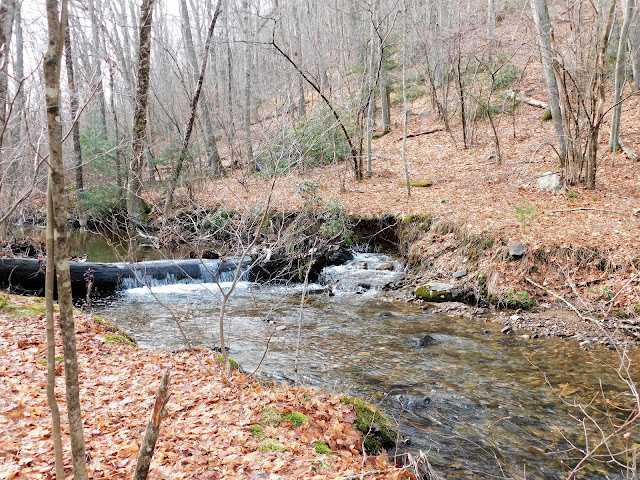 How streams change. I have fished here for over 20 years. The stream changes but the wild jewels within it are always beautiful. 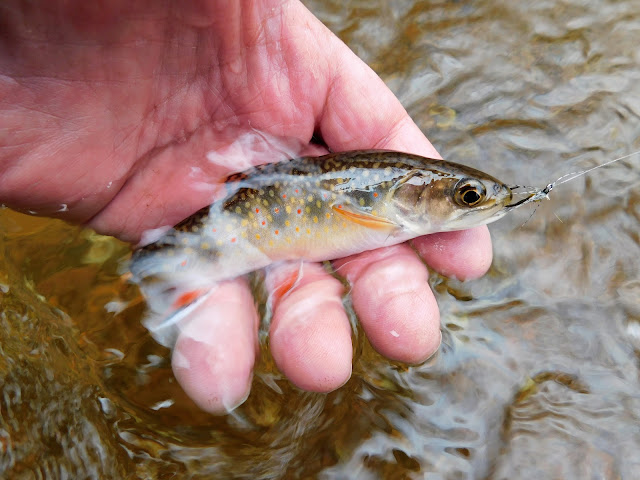