Streamers, Brook Trout, And Sore Knees...One Of My Best Days 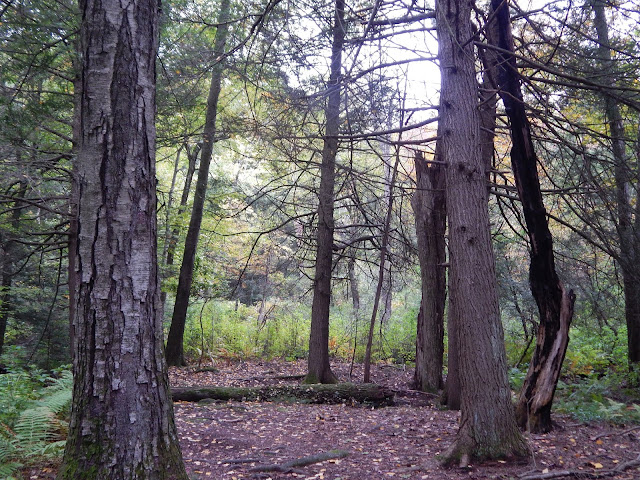 Yesterday I can honestly say was one of the ten best days of fishing in my life. I experienced in a few hours the pure joy of doing everything that one needs to do to be able to say that this is what truly what fly fishing is. The stream I chose is one I'm familiar with. It has a gentle side to it and a nasty side. The walk in can be seen as a gentle one as pictured above. There is a mix of hemlock and hardwood with open banks. It is here that many brookies were slashing at the fly offered. 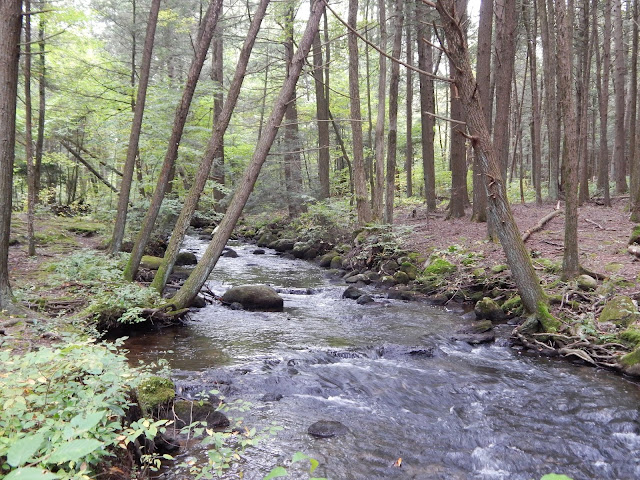 This is a small stream anglers dream. Runs, riffles and small pools. The area is open and tangle free. It is here where I was catching many brookies in the 3-4 inch range. They were viciously attacking the streamer I was fishing. It is here where the fishing became a challenge. The exposed roots became a dominant factor in the comfort factor, I mean they raised heck with my ankles and knees. I try my hardest to stay out of the water at this time. Most of the fishing is from the bank and you can get yourself into some precarious positions standing on roots and rocks and I probably should have found a more stable casting place, but that's small stream fishing. 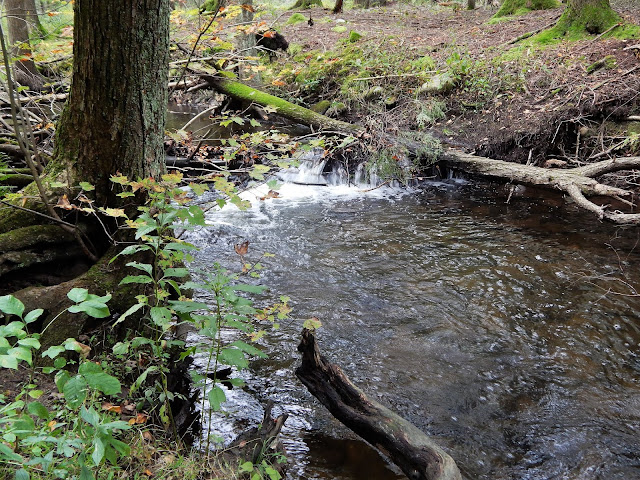 It was in this pool that I was forced to use the upstream streamer technique. This is a method I first learned of while fishing the Upperdam pool in Maine. It involves casting upstream and stripping the streamer back at a fast speed. 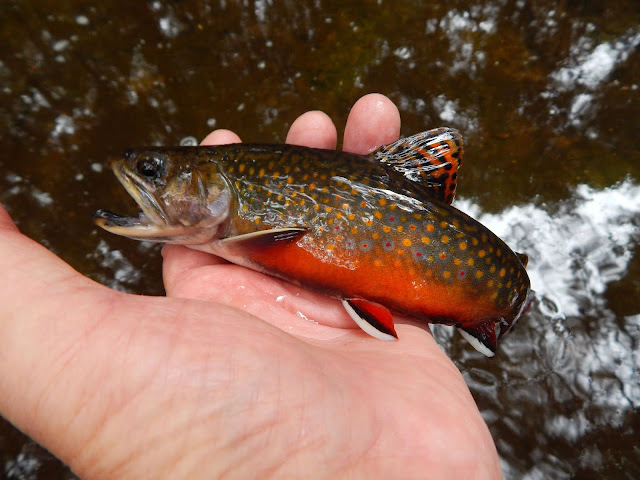 This beautiful male brook trout found that streamer traveling at the speed of sound to much to resist. He hit that thing and actually began to take off line. It was a memorable battle with all of the tricks we both had in our play books coming into use. As he rest at the bank I slid my hand under him and lifted him to take a photo. The streamer slid out and he lay there for a few moments. He then swam off into the stream. 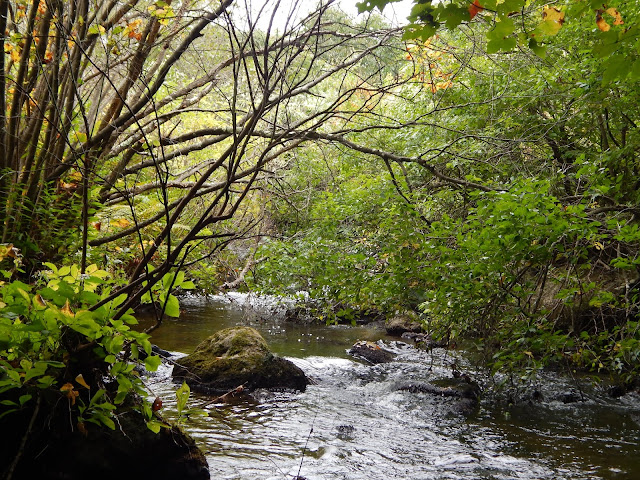 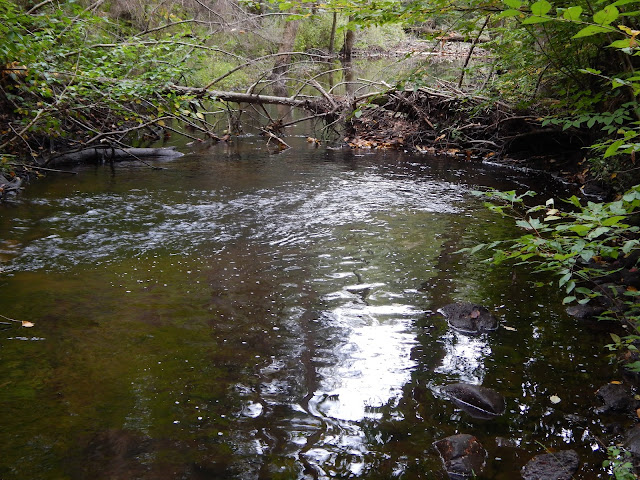 This pool was a challenge. A nice flow coming in and heading to a pile of wood. The pool was deep and its bottom thick with silt and fallen leaves and hemlock needles. I tried to stand on the small rocks but could not keep my footing. I wandered to the area where I could get out onto the clump of woody debris. It was here that I could make a decent cast into the pool. On the third cast I felt a fish take the fly, a surface splash and it was off. Several more casts and the pool seemed dead. I said to myself there has to be a few more in there. Several more casts and then I felt the tug of a good fish. 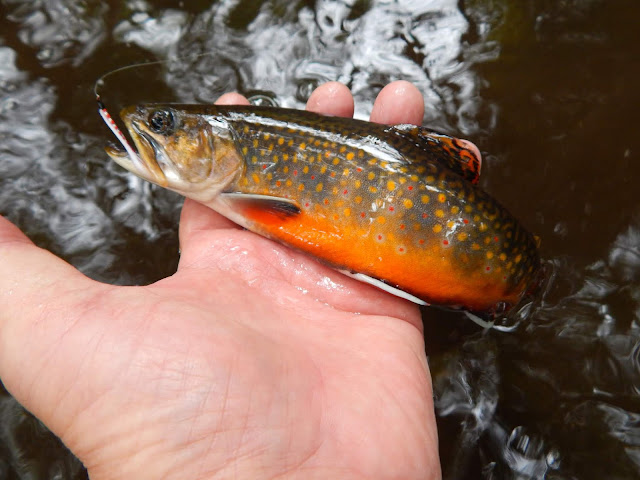 My goodness you talk about a fight...this guy was mean and was not about to be subdued. Luckily he did not try to go into that nasty tangle of wood. I was able to get control and brought the regal native to hand. A wild brook trout in all his glory...carry on my friend. 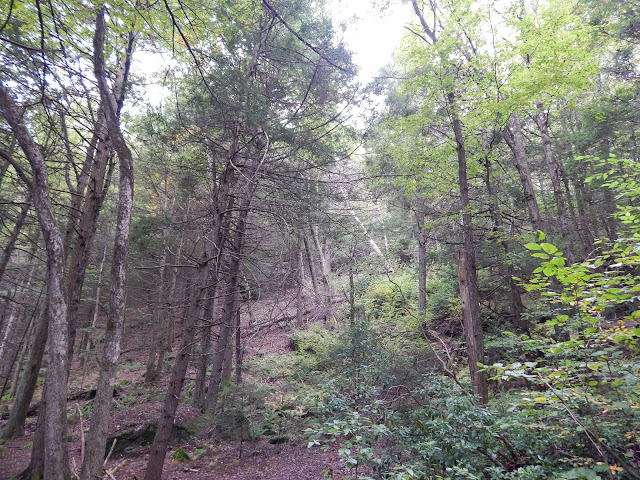 This was a special day in Brook Trout Forest.