Most of you knew Pops as an accomplished Fisherman, fly tyer, hunter, author and blogger. However, Pops had a legacy that most followers of SSR may never have known. For over 40 years he was a legend to many behind the meat counter as an accomplished meat cutter. He started his career at a young age behind the counter of a local meat center and put in many years at several grocery stores along the way.

"Big Al" is still a legend in the grocery world, and he had been retired for 14 years, but people still speak of him fondly and speak to his talent. Even watching him at home, whether cutting up a deer heart or a peanut butter sandwich, he would do it with such precision and grace.

Even up to recent days he would call me in to the kitchen to show me exactly where to place the knife, and how to hold it, whenever he would be butchering a cut of meat. Taking the time to show me step by step how to do it, with patience and finesse that only he could.

As many of you do know, I spent most of my life deer hunting with my Pops, mostly in Pennsylvania. Even going to sit out in the woods with him, before I was too young to hunt myself. These were some of our greatest memories, sitting in the woods alone together, waiting for that deer to come along.

Combing his two passions for hunting & meat cutting, he was always thinking up different ways to utilize our harvest each year. Whether it be cooking up the backstrap, making venison sausage, stews or soups. This brought on a yearly tradition of Corned Venison to celebrate St. Patrick's Day.  A coveted recipe all his own. While looking through things in recent days, we found the Holy Grail of shorts, a beautifully written copy of such recipe.

So, in the spirit of the season and with blessing from above. I share with you the coveted Corned Venison Recipe. Enjoy it in all its glory, and please think of Pops if you decide to make it. 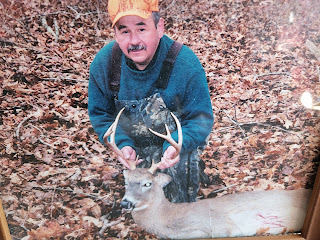 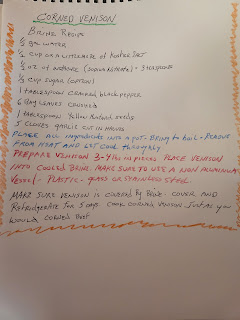