On our same adventure up into the Adirondack Mountains of Upstate New York, we took some time to venture over to the Lake George region. Known as the "Queen of America Lakes" Lake George is 32.2 mile long and 1-3 miles wide, with a depth of 187 feet. This lake is also boasted as being a top 5 bass fishing lake in New York State. The lake is home to many varieties of fish including lake trout, northern pike, Atlantic salmon, chain pickerel, yellow perch, large & small mouth bass. You can also find brook trout at the mouth of the tributaries leading to the lake.

We started our day by strolling through the shops of downtown. Your typical touristy shops to pick up souvenirs and local favorites.  Then decided to throw it back a little for our lunch stop at the local A&W carhop. We had Maverick in tow, so we opted to take a seat at one of the many picnic tables that they offered. 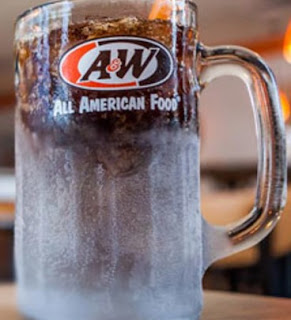 Nothing is better than an A&W root beer in frosty mug on a hot day! 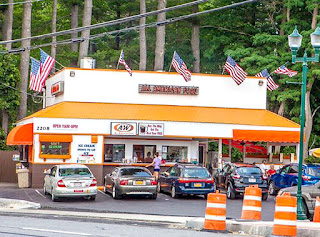 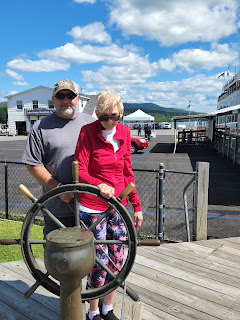 Alan & Jeanette, Lake George
After lunch at A&W, we decided to venture down to the beach area at Lake George, to find that the main beach, Millionaire's Beach, was closed for the day. Luckily for us the adjacent Dog Beach, which is just as nice, but significantly smaller, was open and welcomes dogs at all times.
Maverick had a great time, along with us, in the water. 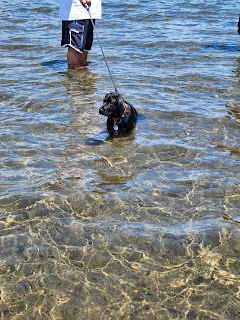 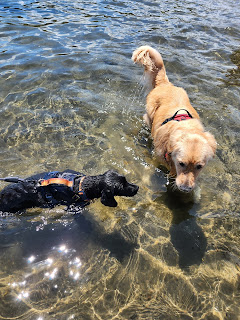 A tired puppy after a good day in the water 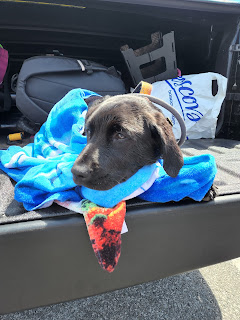 Swimming in the lake was fun and refreshing but had us thinking about what we could have for dinner.
Lake George has many dog friendly restaurants, making it much easier to be traveling with Maverick.
We decided on a barbecue place on the main strip that had nice outdoor seating called the
Barnsider Smokehouse BBQ. 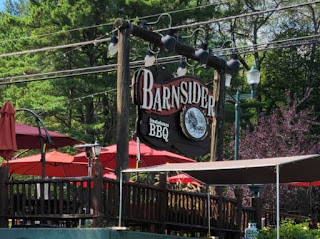 We were pleasantly surprised by the number of selections they had on their menu.
Everything from soups, salads, sandwiches, or full meals of BBQ selections.
Something for everyone, for sure.
We were even more surprised at how delicious all of our selections were when they came to the table. Easily the best BBQ North of the Mason Dixon.
We enjoyed it so much, that we returned two more times during our visit, and even brought their BBQ Sauce home, which you can purchase in the little shop they have located below the restaurant.
If you ever get the chance, and enjoy BBQ, make the stop here.
We have been thinking of making the trip just for lunch! 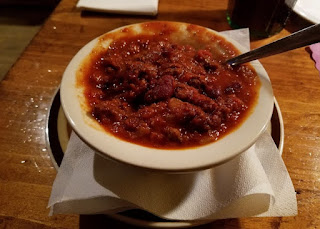 Chili with Brisket on top 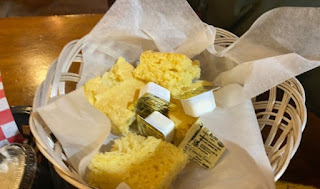 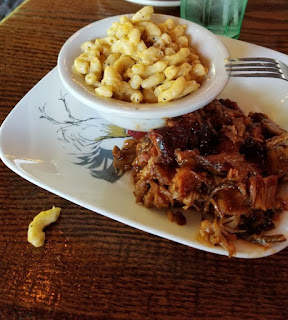 Mac & Cheese & Pulled Chicken
Lake George was a fun day for sure! We will definitely be back, if not for the views, then for the root beer & BBQ.
Posted by Brk Trt at 4:18 PM 11 comments:

Land of the Waving Grass

In mid-June we decided to venture out a little bit further than our backyard with the new pup and Nana and explore a new area we haven't visited before. This took us to Upstate New York, into the Adirondack Mountains. We found a cute little cabin situated on Great Sacandaga Lake.  The lake is situated about 30 minutes away from Saratoga Springs & Lake George, making it the perfect location for day trips.

The word Sacandaga means "Land of the Waving Grass" in the local native language.

The lake was established to serve as a reservoir. Produced by damming the Sacandaga River, to control flooding on the Hudson River. The lake has 41.7 square miles of surface area and 46 miles of shoreline. It is 29 miles long and 5 miles wide, at its widest point. Its average depth is 32 feet deep, with a max depth of 70 feet deep.

With most of the lake's shoreline being dotted with vacation homes, campsites, or private resorts, we were lucky enough to have private access to the lake with our cabin rental. With a spot to swim & fish. But with such luck, the lake was at its highest point, covering the sandy beachy area, to which we had access. This didn't stop us from jumping off the docks in to the dark, freezing waters of the lake. Some of us more willingly than others. It was a beautiful and peaceful surrounding to swim in. 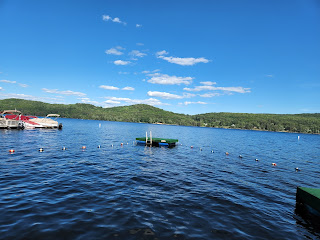 The docks at our cabin rental at Watersedge Campground. 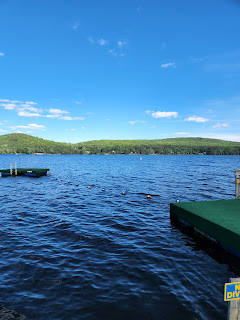 Great Sacandaga Lake is home to many varieties of fish. Including walleye, northern pike, small mouth bass, rock bass, smelt, rainbow trout, brown trout, yellow perch, land locked salmon, pumpkin seed sunfish, & brown bull head. There are four public access points around the lake, including two state boat launches. Although we didn't get to cast a line during this trip, I would love to be able to come back for a weekend and give it a try. Maybe once the seasons change, we can take the trip and do some ice fishing.
There is a long history of fishing in this area.  Many wealthy businessmen built their fish camps here in the 1700's. One of the most notable was Sir William Johnson's Fishing camp "Fish House."
Sir William Johnson was one of the largest landowners in America at the time he built his Fish House in 1762 in this area of the Adirondack's. It's said that the Fish House was burnt during the Revolution, many say by Johnson's own son, Sir John Johnson, who remained loyal to the Crown and led a Tory raid in the area.
Surrounding the ruins of Sir William Johnson's camp, a community was established by some of the wealthiest American's. The streets were filled with large estates, hotels, and were elm lined, unlike many of the other communities in the area.
But this area was very prone to flooding. So, in 1922 the state regulation board purchased 29,000 acres of land in this area. They razed building, emptied cemeteries and built a dam in Conklingville.
In 1930 they closed the gates and flooded the area, making Great Sacandaga Lake. Leaving the community and Sir William Johnson's house at the bottom of the lake.
Today if you drive down Country route 110, near its intersection of country route 109 there is a plaque that indicates that "Fish House" lies 1500 feet Northeast of this marker. 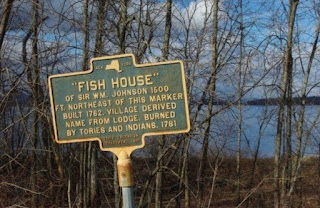 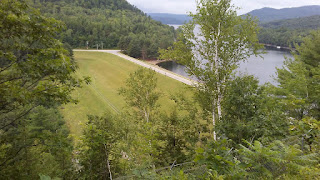 If you're interested in learning more history about this area Author Glen Pearsall is an author that focuses on the history of the Adirondack's very well.  He has several novels out about it, but also contribute to the Adirondack Almanack online. 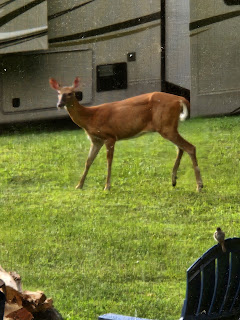 The deer were plentiful on the property we were on. This little beauty stopped by every morning, with a few friends to say hello. As Pops always said, if only they were that friendly during hunting season.
The View from our cabin was so beautiful. It was so peaceful and relaxing to sit on the back porch and look out across the lake. 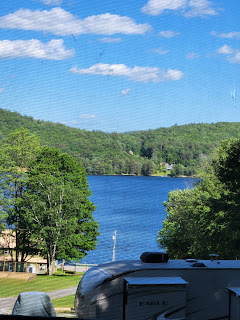 We were lucky enough to be there for the full moon, and it didn't disappoint. 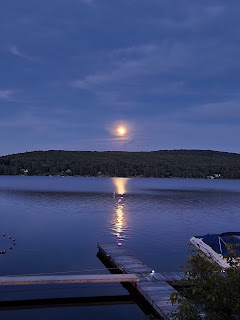 In fact, the views all around the lake didn't disappoint. 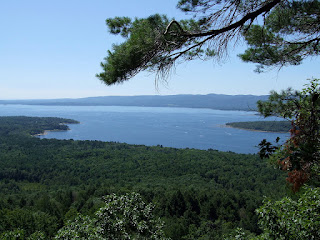 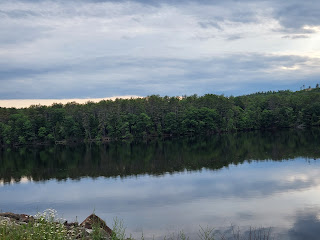 We would love to see these views in the fall, when all the foliage is changing. 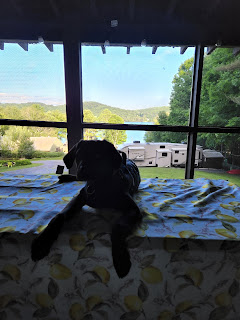 Maverick loved all the nature watching off the back porch too. 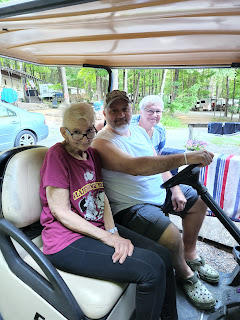 Jeanette, Alan & Carol riding around on the golf cart. One of the favorite activities of the week.
We have to get one of these for home.
We had a great time in Upstate New York. Really enjoyed the solitude and the beauty of our surroundings. We can't wait to head back up there again and enjoy all this area has to offer. 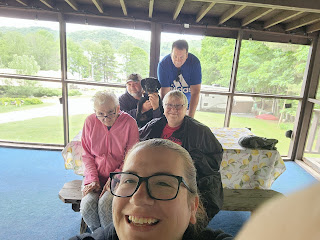 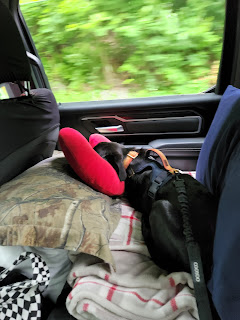 I think its ok with Maverick, too. He's mastered this road tripping thing.