Well the mystery fly has been identified. After searching the net and asking a few anglers and fly tyers I was able to nail it down. The answer came from someone who was very close to Fran, it was Jan Betters, his wife.

I sent an email to her along with a photo and she responded quickly. She told me it was one of Frans favorites. Well I guess I should tell you the name. It's called a "Picket Finn"

Mark tied up a few similar to it and we tried them out Saturday.. The second cast I made a brook trout hit and was on. Although I lost him it was a good start. In that same pool I hooked 2 more, and in a stretch of riffles I hooked another. The fly works. The only problem was the bead may have been a bit to heavy, and working the fly was difficult in the small stream. 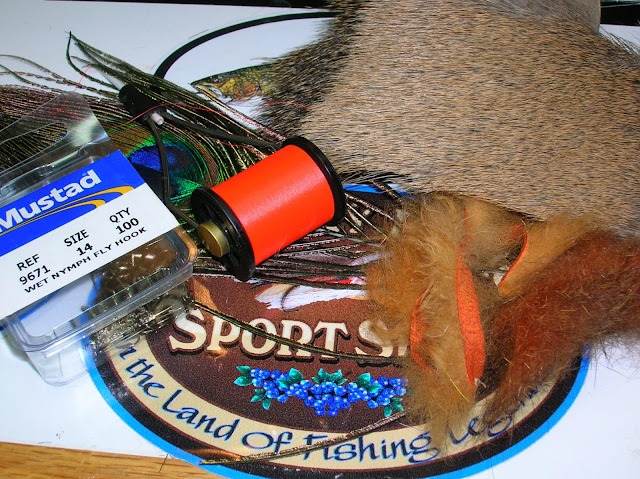 I sat at the bench with the materials shown here and tied up a few variants of my own. Different body dubbings, wing materials, and some with hackle. The flies are not weighted and should ride in the stream a little better.

I'll give these a workout soon and let you know how they worked.

CLICK IMAGES TO ENLARGE
Posted by Brk Trt at 7:30 AM