The Ausable Wulff, and a Mystery 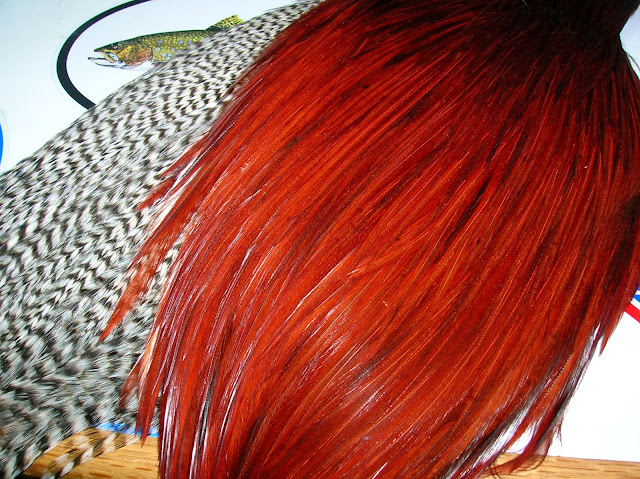 Dry fly hackle. Brown and grizzly dry fly hackle. This combination of color has produced some of the best dry flies ever cast upon water. This is about one of those best flies.

The Ausable Wulff was created by Fran Betters of Wilmington, N.Y. I'm not sure of the date, but it was perhaps around 1960. It's a fly that has the ability to attract trout, bring them to the surface and take it without hesitation. It's design enables it to float in swift turbulent fast waters and remain highly visible to the angler and fish. I fish this fly so very often on small streams and wild brookies and browns both accept. I like to think Fran created this fly for the small stream angler.

The next fly, also a Betters creation is a bit of a mystery, that is to me.

I picked this fly up at Frans shop. It was there, looked interesting so I picked up a couple. The first time I fished it was the day after Christmas. It was in a small stream with some deep slow pools. Several casts and I was into a fish. I'd like to say that the first fish was a trout, but it was a "chub". I continued to fish the fly that day and had taken a few nice brookies with the fly. I had two of these flies, lost one so I won't fish the last one until I can get some more. Since the shop where I bought the fly is no longer there purchasing some is impossible, and I've never seen such a pattern in other shops or on the internet. Mark, over at "Fishing small streams" who is a wonderful fly tyer has said he would attempt to duplicate the fly.

So if any of the fine readers of this blog happen to know of the name of this fly I would love to know.