Oatmeal, and Another Lesson 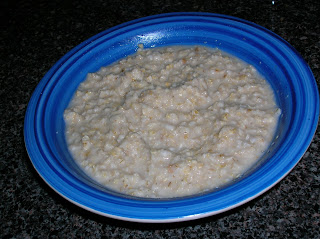 After fishing these small streams for many years one thinks he knows everything about angling for these small but beautiful trout that live in these streams. That's why I love fishing these streams, because there's always a new pitch thrown at you and it's a new game.
Last Tuesday I fished a stream, a typical small stream that I was familiar with. Well four hours of angling netted me one bump. I could not explain this happening, so I didn't dwell on it for long and accepted the loss of fish to hand was my sloppy fishing, or the wrong flies were used.

Yesterday's forecast was for a partly sunny day with temps in the low forties, with the winds picking up and the temps then dropping back to the thirties. The next four days are to be cold.
So with that brief window of not to bad conditions, I had a bowl of hot oatmeal and left for a small stream. It's a stream I'm familiar with, and with the rains of the day before was a bit off color and slightly high.
Tying on a staple fly, one that has served me well, I sent it off on a drift into a fishy looking pool. The fly worked well, covering several areas where a trout would hold. Cast after cast into that pool brought nothing. Moving down the stream and casting into several places that have brought some interest in the past produced the same no interest. About this time the sky got cloudy, the wind picked up and all of a sudden, rain, snow and sleet. All three whipping into my face and stinging like wasps. At that time the sound of trees making noises as if there were a herd of elephants running through the woods. Taking cover as best I could I waited out the outburst of nature. Several minutes later the precipitation stopped and the sun returned.
I resumed fishing, changing where I presented my fly, which was a shallow rifle at the head of a deep pool. It was there in the middle of the riffle as the fly began to swing that the trout struck. I pulled back in the attempt to set the hook and pulled the fly away. Seeing I had lost the trout I sent the fly drifting down stream. A second or two later the fish hit and was on. The two weight did its job and a lovely wild brown was at hand.
That same riffle also gave up a brookie, which hasn't happened very often.
Another lesson learned. 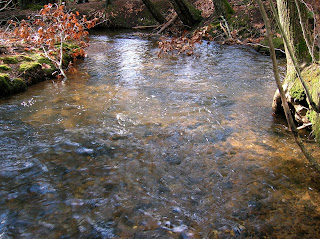 The trout were in this run, about midway. The deep pool where I assumed them to be is just behind the fallen branches. 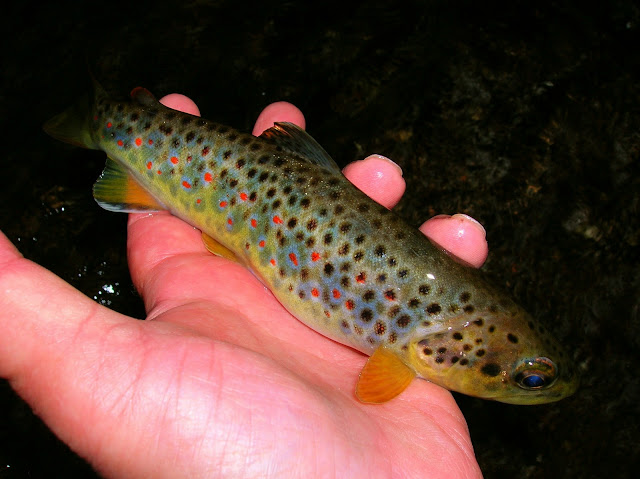 These two guys were apparently feeding on something that was moving in the riffle. 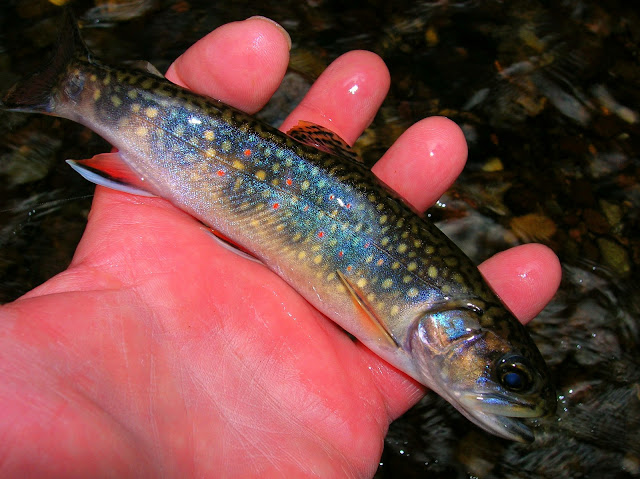 Well with a not to promising weather forecast for the next few days, I'll guess it's more time at the desk.