An Evening of Wonderful Surprises 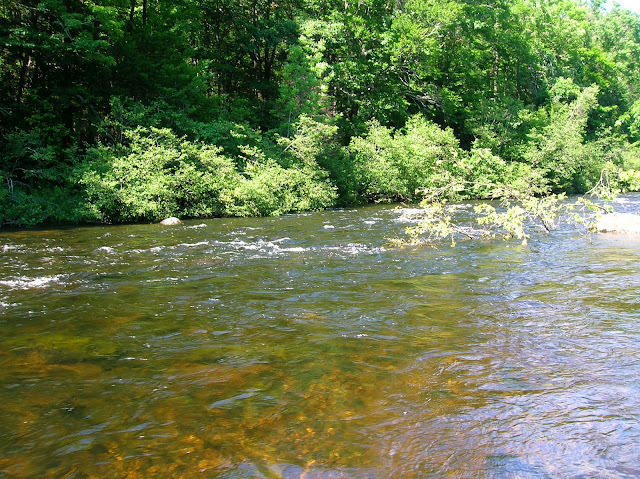 I teamed up with Kirk yesterday to fish the Farmington. We got to the river about 4 pm. Sunny and bright, water that was cold and so very clear. Kirk moved to the shady side of the river and I was going to work the faster riffles a bit up stream. We both started fishing dries, and soon realized it was going to be a tough outing. There were fish rising about but we could not determine what was on the menu. It was about an hour later, and many different flies that I got my first hookup. A small brown who was very energetic. The fly he chose to take was a partridge and orange soft hackle. A cast or two later and the soft hackle put another brown in the net.

We continued to fish this section for awhile. Kirk had fish rise to his flies but kept missing. I never had another hit after the last brown. This river has a way of humbling an angler for sure. 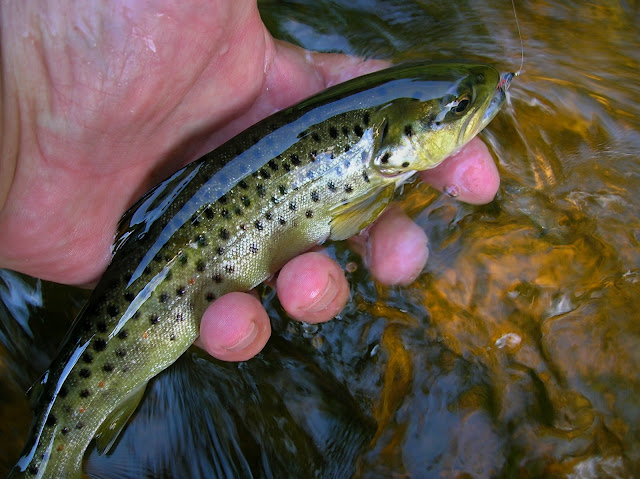 These two browns found the soft hackle to there liking. Perhaps they were the only two fish in the pool....NOT. 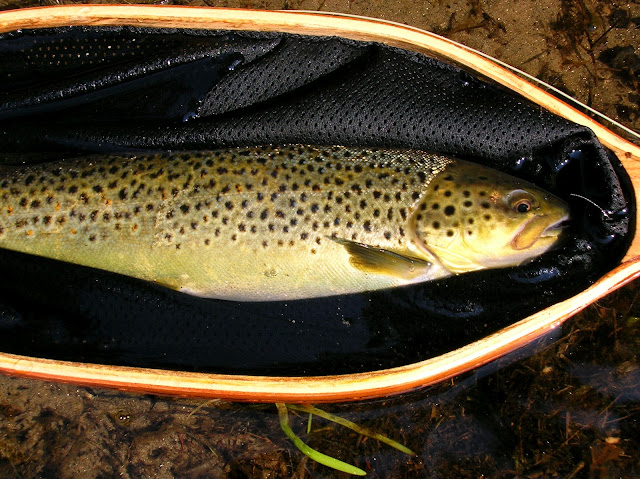 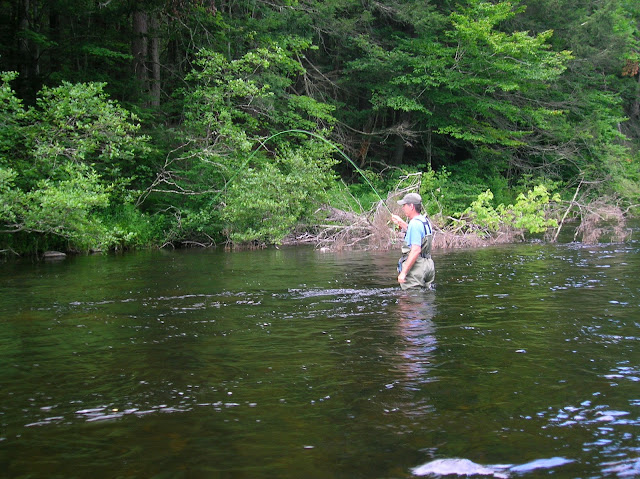 We continued fishing the upper part of the pool. Are plan was to take a few more casts and move to another part of the river. Kirk tossed a Bomber to the spot near the fallen tree. That's when a brown rose and took the fly. 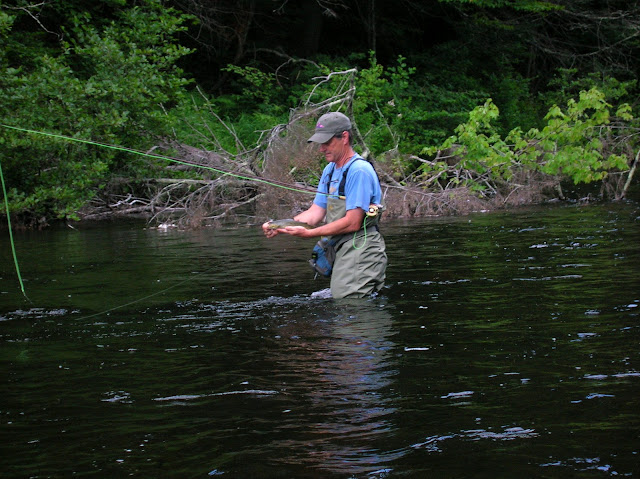 Kirk and his first fish of the evening. 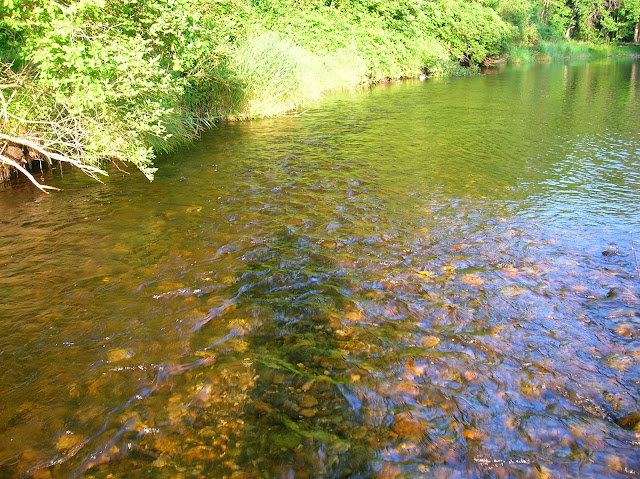 We hopped into the truck, grabbed a cereal bar and some water and moved to a place downstream. When we arrived Kirk moved upstream and I went south. In the run that's pictured there were several trout rising. Try to get them to eat a whole different game. I left that side and moved to the other side. It's a slow moving pool, almost like a pond. I could see fish rising right along the bank. There was high grass falling into the water and casting was going to be tough.

I tied on a Bomber and worked the fly as best I could, trying to place it close to the rising fish. Several casts later and the trout rose and missed. Keep on casting I said to myself. Finally it paid off and this wild char came to hand. My excitement level went through the top.

You might say to yourself what's the big deal about a 3 inch brookie. Well this just reaffirms my thoughts on natural reproduction.\' "wild brook trout" in the Farmy. 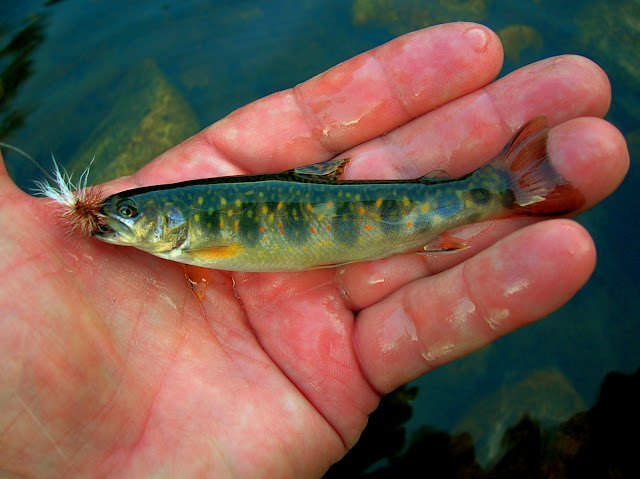 Well many more casts of the Bomber brought up several more fish but none to hand. Until. 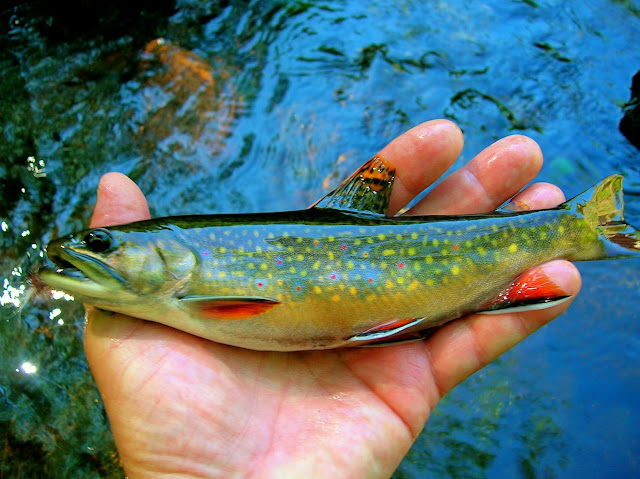 On a drift of the Bomber into the center of the pool, like I mentioned earlier it's almost like a pond. The fly almost stopped drifting when this fellow hit. I'm really liking what's going on in this river.

On this evening the hatches the Farmy is noted for never came off, at least while we were there. At times this river can put the best of anglers in their place.