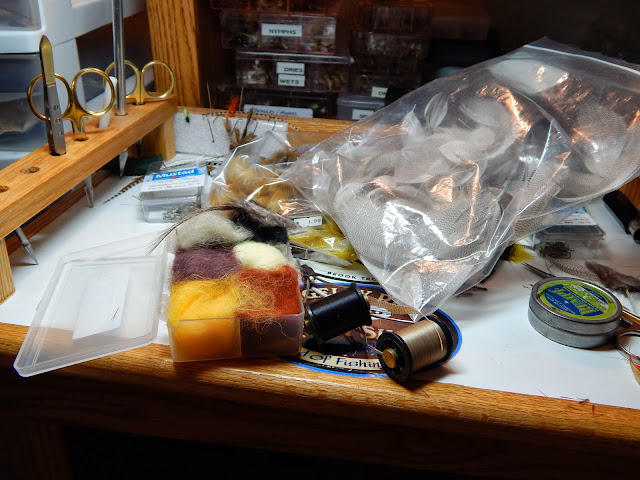 They say that ninety percent of a trouts feeding takes place underwater, and probably seventy percent of that underwater feeding is almost on the bottom. This is why a nymph fisherman can be so successful, he puts the food where the trout are. Then between the bottom and the surface is that sweet spot where the other twenty percent do there feeding. That's where the wet fly comes in. Wet flies have been around since about the time of Walton, and many of the patterns were of English design. These flies took some pretty selective trout from those early times. The patterns available today are perhaps in the thousands, and many of them are very beautiful and many look like they should be gobbled up. The wet fly looks like an emerging insect, or in its other function can be a tremendous attractor drawing some very vicious strikes. Wet flies are suitable for both still water and river.

In this post I'm going to speak of river, small stream use of these flies. These flies will take the simplicity route which I favor. I have had much success with the few patterns I tie. I use some basic dubbing, various colors of hackle, and waterfowl feathers also in various colors. I try to keep them sparse and I have found out that the more they are used and chewed on the sparser they get and the better they work.

I generally fish them casting, quartering downstream. The fly is allowed to drift freely as if it is a struggling insect. At the end of the drift I allow the fly to remain stationary and hang there for a second or two, then I begin to retrieve it at various speeds. A strike can occur at any point in the sequence, but I have found that the most strikes come as the fly turns and begins to straighten out. I generally fish one fly but there are many anglers who are very good at fishing two and three flies at a time.

I have listed a few sites and people who you can contact on fishing and tying various wet flies. These guys are pretty knowledgeable when it comes to these flies. Steve Culton, at http://currentseams.wordpress.com/....Mark at http://fishingsmallstreams.blogspot.com/.....Mark is great at soft hackles. Don Bastian, at http://donbastianwetflies.com/category/wet-fly-photos/..... Enjoy fishing and tying these old and productive flies.