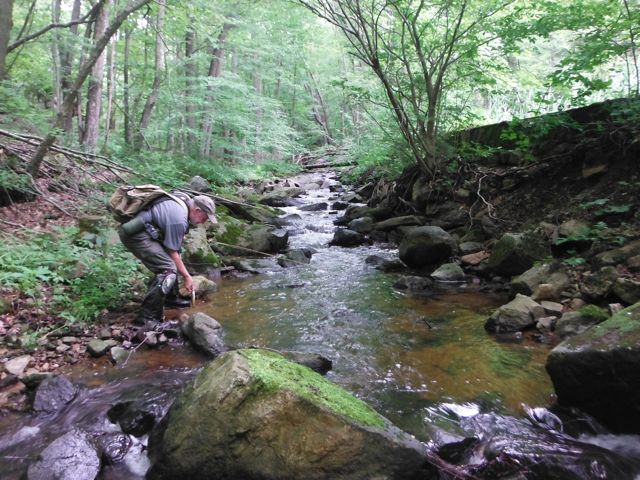 A couple of months ago I sent some "Crowningshield" dry flies to Chuck in New Jersey. He and a friend George gave the flies a test on some Jersey wild trout streams. Here is his report as written to me.

I've now used your flies on two outings. The first test was on a quick hour and a half trip to the no name River, which is a fairly close wild brown trout stream where the fish are very difficult to catch. These fish get a lot of pressure since the river is in heavily populated Bergen County, and the stream is low gradient, so the trout can see you and spook easily. It generally fishes better with nymphs than dry flies. OK, you get the picture...it's a tough place to catch fish...I sometimes get skunked there...and a 3 or 4 fish day is doing pretty good. I didn't see any risers, but put an orange thread Crowningshield on a 5x tippet, and made a cast into the center of a slow pool. The fly pounded up a nice 9 inch wild brown that sucked it right down. I stayed with the fly over the next hour, and moved a good number of fish to the surface; hooking 5 and landing 3. For a tough stream like the no name River, I'd say that fly gave a good accounting of itself. The next day, I fished a small stream that has more of a classic drop and small stream character. The stream has wary wild browns in its lower end, and wild brookies in the upper section. I was fishing with my good friend and small stream guru, George. I gave an orange thread Crowningshield to George, and I put the same one I used the day before on my line. I quickly caught a nice 10 inch wild brown, and a few more smaller trout. George caught a beautiful brown of almost 14 inches at the foamy start of a deep hole using your fly. He's a fan of it. We both caught brook trout in the upper section using the fly, with me switching to a purple threaded version just for the variety. 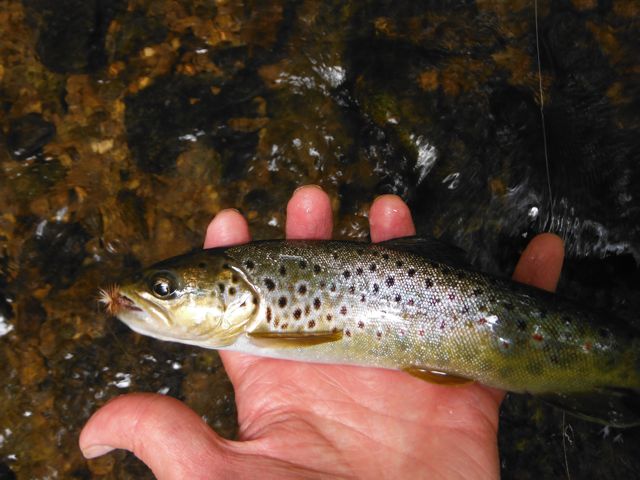 I'm going to keep using the fly, so I'll give you an update. I want to try it on some wild rainbows (even though I'm sure that it will work) and also on some tougher selective rising fish. Overall, George and I both say that this if a very good fly! It's a little difficult to see in the shadows, but it floats well, has been durable, and seems to have the knack of bringing some shy fish to the surface. I've tyed a few copies to use so I can keep one of your originals in a safe place. If you send me your email address, then I can send you an attachment of pictures of trout caught with the fly. Thank you for sharing this pattern with me. Chuck 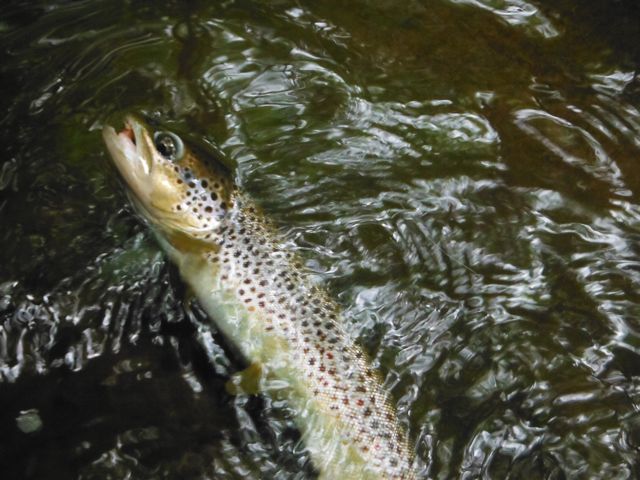