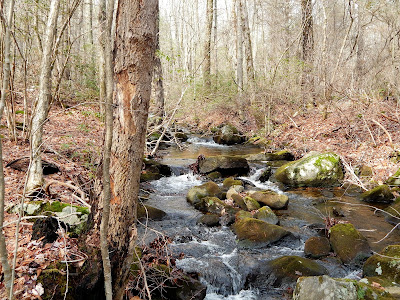 It is April in the highlands of Eastern Connecticut, a little stream of water winds its
way down the gentle hill on its way to a junction and a merge into a larger river which
in turn will reach its destiny with the sea. The Spring rains have started and the stream is filling almost to its banks. It is a refreshing sight and a wonderful feeling
of hope and of satisfaction to the wild brook trout that call this stream home.

The thoughts of the last years heat and low water conditions are but a memory to the
brook trout, for they only look to the future, a time of bounty and well being.
For in the lives of these brook trout have been tested many times, their tenacity and
bull dog toughness in times of hardship should be a model for all.

Now being pushed back into these tiny streams they seem to thrive. While not the largest
of salmonids they are the most beautiful. They have a "will" like nothing else on earth.

These wild creatures of the little waters are in a time of plenty, and when the days come that are harsh and almost unbearable the "Will" to survive will kick in and the brook trout will endure. 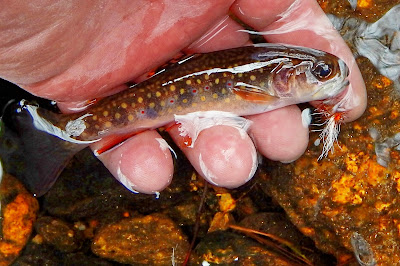