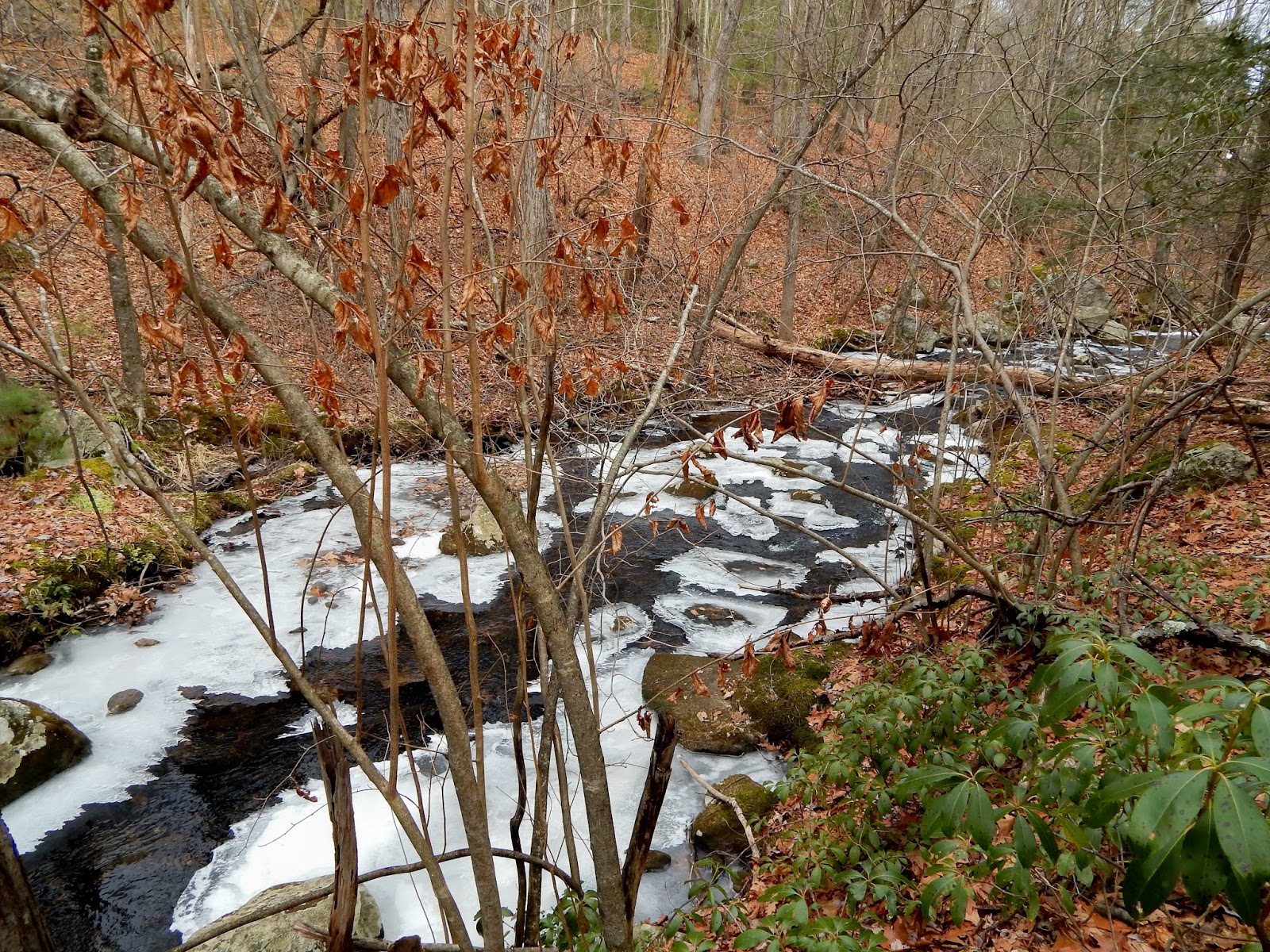 Saturday dawned a cold one, a continuance of low temps that started before New Years day. The weather was to go down hill in the form of snow leaving me a small window of time to fish. I had a late start and when I arrived the clouds were thickening. I was geared up in short time and was drifting a fly from the 2 weight promptly. Winter streams possess that clarity that is almost as if it were not there. A simple placement of your hand into it and you'll know it is indeed water.

Shelf ice had built up along the edges and in some places it was heavy. Water flowing over rocks and wood jams produced many beautiful ice sculptures known only to nature. I wear waist high waders and although I do not wade the stream they are needed to cross the stream at times. With such ice caution was paramount.

In the time I fished the need to change flies was not necessary. The pinkie, and the bomber were all that were needed. I worked the slower pools and runs hoping to find some one willing to dine. I was indeed fortunate to have a few whack the pinkie just as it drifted under the shelf ice. But whack it was all I got and a couple of hours produced not a fish to hand. 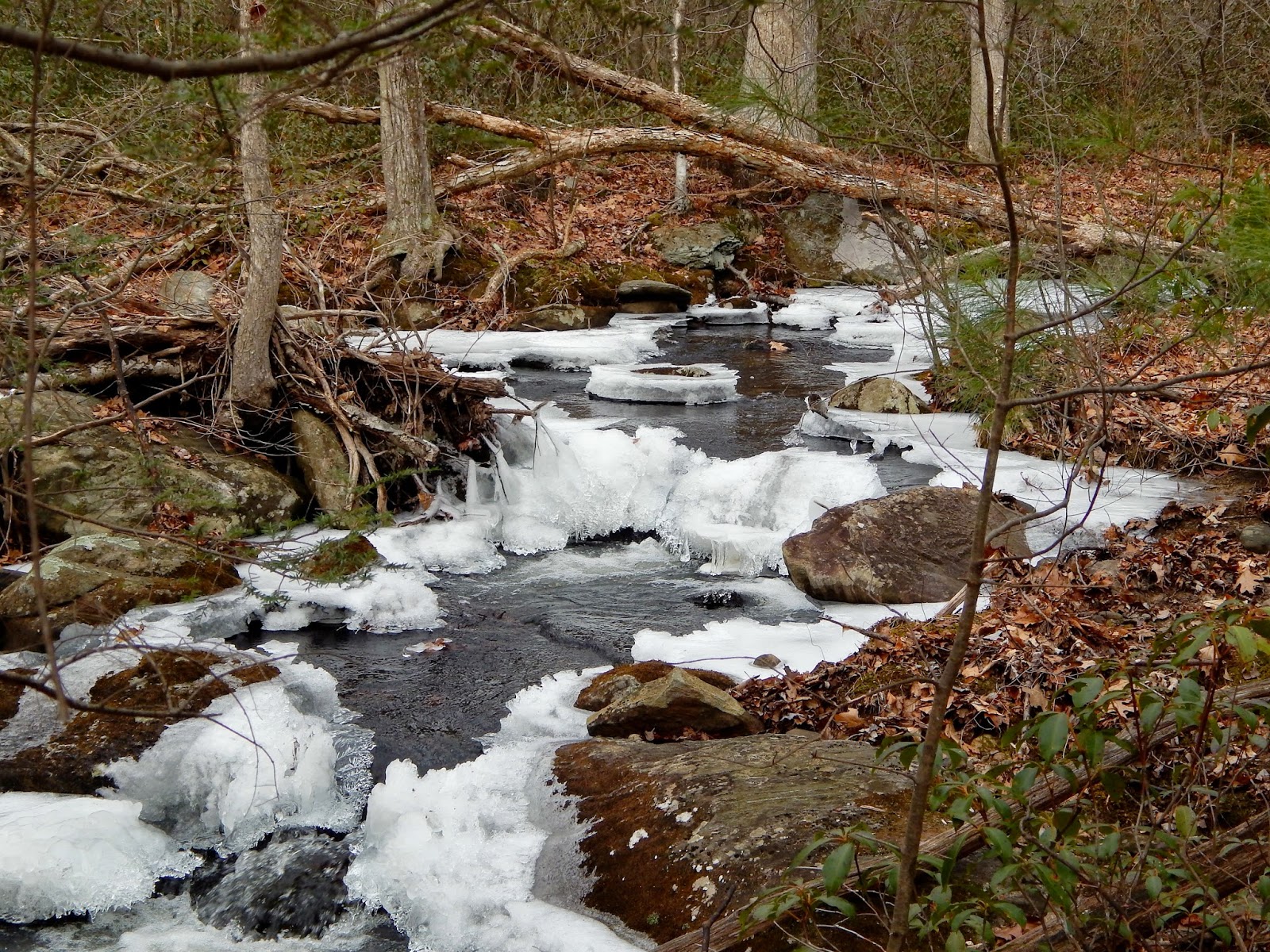 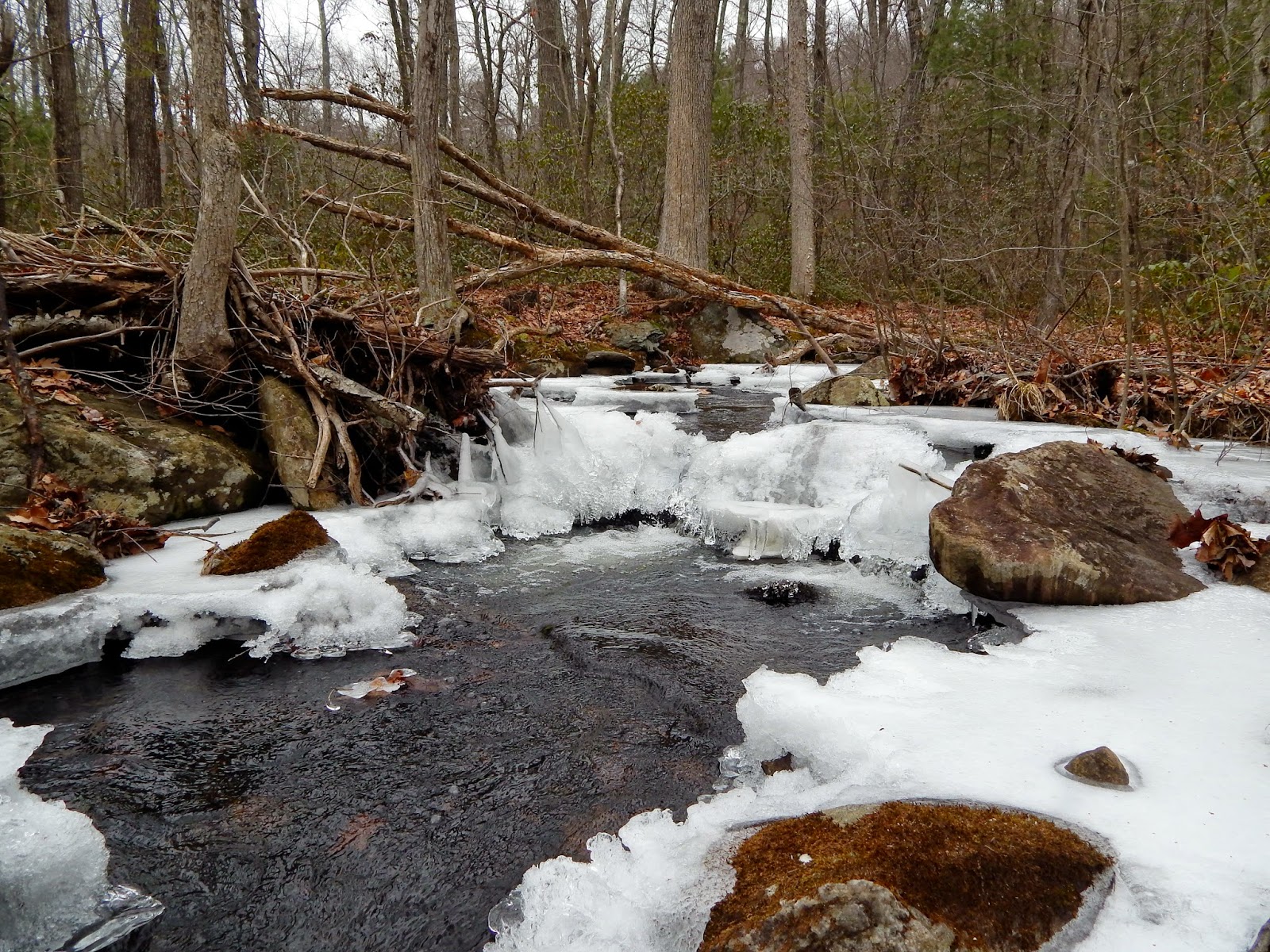 It was at the tail of this pool that a nice brookie chased the pinkie. He did this several times, chasing and not taking. When the fly was allowed to drift he paid no attention to it, pull it back and the fish would chase. I tied on a bomber and drifted it through the pool...nothing, pull it back and a strike. This happened until I gave up and moved on. 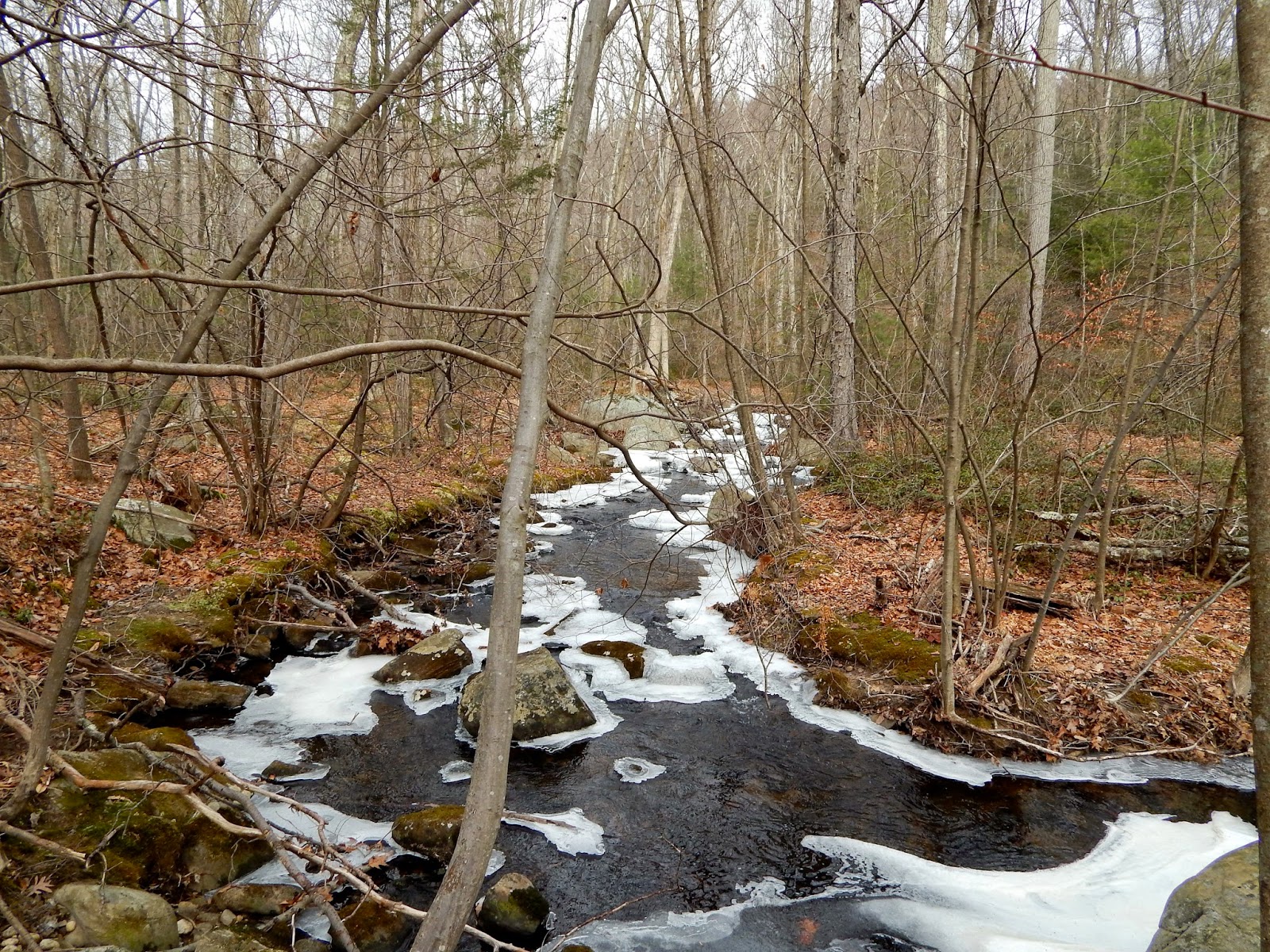 I started to move down stream as the first few flakes of snow fell. I reached this pool at a bend in the stream. I sent the bomber in to find a fish. I worked that pool well and no response. The snow seemed to be slowing down, so I tied pinkie back on and we went back to work. On the third cast the line tightened and I set the hook. A few moments I had to hand a winter jewel.

A quick photo and release and off he went. I knew that was going to be my only fish of the outing, for I was going to leave before the snow picked up in intensity. I got back to the car and it was snowing to beat the band. I did not take the time to get out of my waders deciding to drive home in them. As it turned out it was a good decision because the snow became quite slippery. Slow and easy I made it home OK..........hot soup anyone? 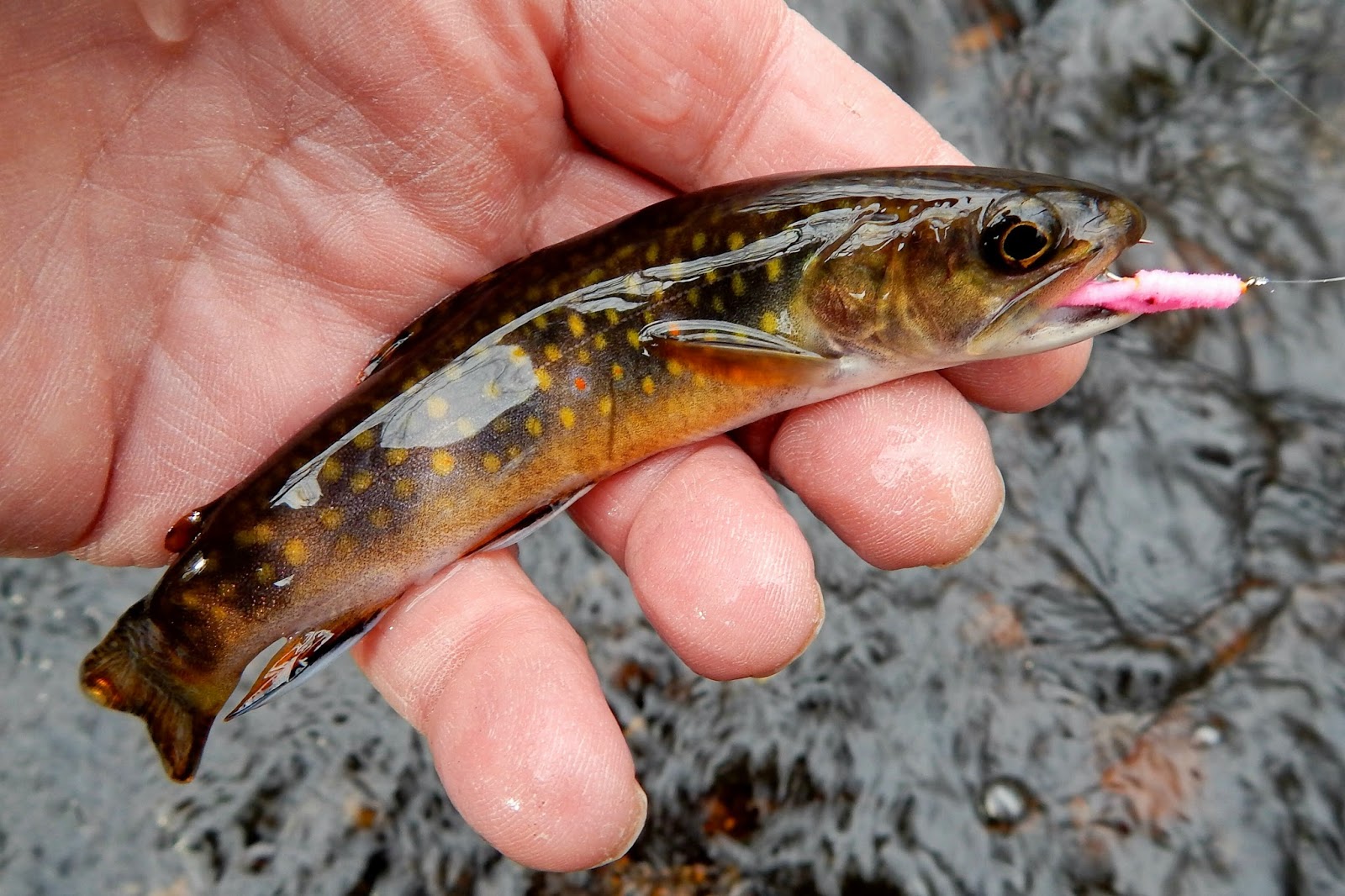